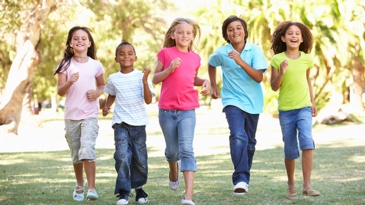 Students learn that physical and mental activities can be improved with practice by repeatedly walking while reciting a poem.

As part of this activity, students visit the PowerPlay exhibit at the Children's Museum of Houston. This lesson is best conducted before going to the Museum. Also, prior to the visit read "Teacher Tips," to plan the visit, and to learn about alternative options for conducting the activity without a Museum visit (see PDF).

This activity is from the PowerPlay Teacher's Guide. Although it is most appropriate for use with students in grades 3-7, the lessons are easily adaptable for other grade levels.

The PowerPlay project is a partnership between Baylor College of Medicine and the Children's Museum of Houston.

The Children’s Museum of Houston’s PowerPlay exhibit is designed to reinforce healthy behaviors and help young people discover new ways to become more physically active. By introducing students to new activities that require practice to master, this investigation will help students experience the differences between well-learned movements that seem almost automatic and new movements, which require more concentration to do well. This activity should be completed before your class visits the Museum.

Many of the body’s movements happen without our having to think about them. Some of these automatic movements, such as breathing, beating of the heart, and movement of food through the digestive system, help to keep our body functioning properly. Other actions, such as reaching down to pick up a pencil or walking across the room, require us to make a conscious decision. Movements like these are called voluntary, because we—or more specifically, the cerebral cortex, or “thinking” part of the brain—must make a decision to carry them out. The cerebral cortex chooses how to proceed and then sends a signal out along a motor neuron (nerve cell that delivers signals from the brain and spinal cord to the muscles).

These decisions and communications take time. As you become skilled at a given movement, you gradually are able to perform it more rapidly and smoothly than you could at first. Well-learned movements are guided by another part of the brain, called the cerebellum. Eventually, with practice, you can carry out some repetitive, rhythmic voluntary movements without much concentration at all; they become almost automatic. Examples might include walking, running, bicycling, jogging, skating or dancing. The cerebellum coordinates many of these movements, leaving the cerebral cortex free to carry out other jobs. Practice also improves performance in other kinds of tasks that require memory, such as playing a musical instrument or learning a list of names.

Over a period of several days, have students practice walking in a straight line while reciting the alphabet backwards. By the end of the experiment, students should observe an increase in speed and accuracy.

Ask, What situations can you think of in which it would be very important to be able to walk, run, ride a bicycle, etc., without having to pay attention to those movements? Have each student write a short paragraph describing one such scenario.