Mad Cow Disease (known scientifically as bovine spongiform encephalopathy, or BSE) is an illness that attacks the brain and spinal cord in adult cattle. It has been proposed that BSE originated from scrapie (endemic spongiform encephalopathy), a similar disease that infects sheep and goats. Some researchers believe BSE was transferred to cattle through feeds that contained animal protein from infected sheep.

The name "Mad Cow Disease" comes from the strange behavior and symptoms seen in cattle that have the disease. These behaviors and symptoms include aggression, lack of coordination with inability to stand or walk, and abnormal posture. First identified by a veterinarian in England in 1986, BSE progresses very slowly, but is fatal. 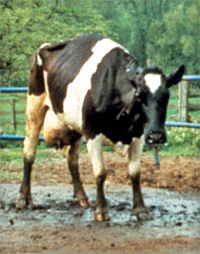 Since then, the agent causing BSE in cattle has been linked through epidemiological studies (research that follows the causes and distribution of the disease among different populations) and laboratory research to a similar disease in humans that also damages the central nervous system. Scientists hypothesized that humans could contract BSE by consuming parts of the nervous system from cattle infected with the disease. The human form of BSE is called variant Creutzfeldt-Jakob Disease (vCJD), a form of another fatal disease of the nervous system in humans, Creutzfeldt-Jakob Disease (CJD).

BSE, CJD, vCJD, and related diseases of the nervous system are associated with prion proteins, agents that are very different from all other disease-causing agents. Neither viruses nor bacteria, prions are thought to be proteins with abnormal shapes. Once in the body, prions are believed to convert normal proteins in the nervous system into the abnormal prion shape. Very recent research suggests that prion-like changes in protein shapes may be important for the formation of long-term memories.

In the case of diseases like BSE, prions change the shape of normal proteins into the abnormal prion shape. Amazingly, prions contain no genetic information, but still can cause disease. When a person eats the brain, spinal cord or other nervous system tissue from an infected cow, prions are believed to be absorbed into the body, where they slowly begin to transform normal proteins, eventually leading to fatal damage to the nervous system. Stanley Prusiner, an American scientist, was awarded a Nobel Prize in 1997 for his work on prions.

Mad Cow Disease in humans (variant Creutzfeldt-Jakob Disease or vCJD) is different from Creutzfeldt-Jakob Disease (CJD) in several ways. First, vCJD causes disease in adults much younger than those who usually develop CJD. In the United States, the median age of persons infected with vCJD is 26 years. The median age of persons who develop symptoms of CJD is 68 years. In addition, unlike CJD, vCJD infection is not limited to the nervous system. Prions also have been detected in the lymphoid tissue of patients with the disease.

The Centers for Disease Control and Prevention are conducting research on vCJD and BSE, and are reviewing and monitoring possible cases of CJD and vCJD in the United States. In addition, the Department of Health and Human Services has developed an action plan to investigate and protect US citizens from BSE and other related diseases.

To reduce possible risks of vCJD infection, the CDC has provided the following guidelines for beef consumers.