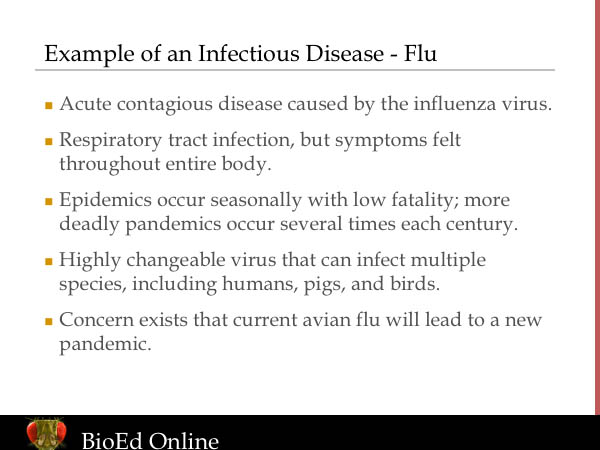 Example of an Infectious Disease - Flu

Influenza virus is spread through the air and causes an acute infection of cells within the respiratory tract. Following a brief incubation and prodromal phase, an infected individual will experience chills, fever, body aches, headache, weakness, and sometimes a sore throat and gastrointestinal symptoms. Except for the elderly, young children, and people with certain health conditions, seasonal flu epidemics are not life-threatening. A person usually recovers within a week, but fatigue can last up to several weeks.

The flu often can be prevented with a vaccine. However, the “flu shot” must be given yearly because the flu virus mutates rapidly and thus, flu strains vary from year to year. There are two types of vaccines: live, attenuated (weakened) viruses; and inactivated. The vaccine stimulates the body’s immune system to identify and remember the invading virus. Subsequently, if the virus is detected, the defense is mounted and the virus is neutralized before it can spread. Anti-viral drugs are available, but these must be administered early in the course of infection to reduce the symptoms and duration of the disease.

Of greater concern are variants of the flu that have never existed in human populations before. These variants can cause much more deadly pandemics because our immune systems have not experienced them previously and cannot mount an effective immune response against them. During the Spanish flu pandemic of 1918–1919, more than 500,000 people died in the United States alone.

Currently, there is an outbreak of a strain of avian flu, called influenza A/H5N1. H5N1 has killed large number of birds in Asia, and now has spread to parts of Europe, Africa, and the Middle East. So far, there have been only a limited number of human infections. These resulted almost exclusively from direct contact with infected birds, but there is concern that the virus will mutate in a way that will make it easily transmissible from person to person. It is unclear whether effective vaccines and antiviral drugs could be produced in sufficient quantities in a short enough time period to protect the population should this virus acquire the capability of spreading easily from one person to another. Unfortunately, scientists can not predict if or when this virus—or other bird flu strains—might mutate and become transmissible among humans.