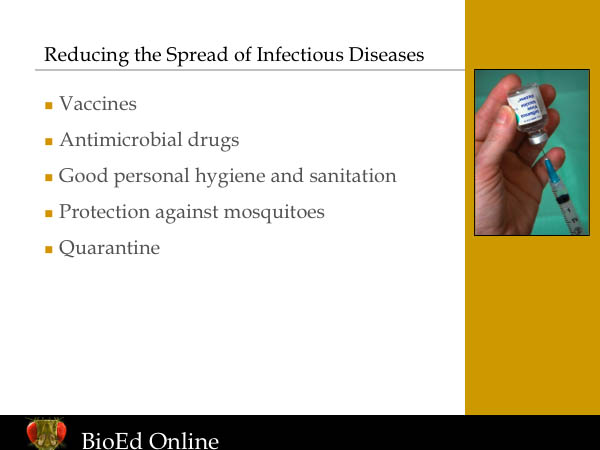 Reducing the Spread of Infectious Diseases

The most effective method of stemming the spread of infectious disease is through vaccination. Vaccines consist of weakened or killed microbes, or just components of a pathogen, and stimulate the body’s natural defenses—the immune system—to combat infections. Vaccination has eliminated smallpox, nearly eradicated poliovirus from much of the world, and drastically reduced the incidence of childhood infections, such as measles, mumps, and whooping cough, at least in the developed world. Influenza vaccines are available to reduce the occurrence of seasonal flu, although the shot must be given yearly due to the extreme variance of the influenza virus from season to season. Vaccines for other infectious diseases, especially HIV, still are being sought.

Antibiotics are effective for many types of bacterial infections (although they are entirely useless against viruses). But increasingly, bacteria are becoming resistant to the arsenal of antibiotics at our disposal. Very few drugs work well against viruses (anti-viral drugs for influenza and HIV were discussed in the previous two slides). Anti-fungal drugs exist, but their use is limited.

There are no vaccines against protozoan parasites, and other medications against them are becoming ineffective. Therefore, protection from insect vectors such as mosquitoes and control of mosquito populations are crucial strategies in containing the spread of insect-borne diseases, such as malaria. Good sanitation, water purification, hand washing, and proper cooking and storage of foods all help to reduce the prevalence of infectious disease. In cases of highly contagious, often fatal diseases, quarantine is employed as a means of preventing the spread of disease through a community. However, regardless of the disease, it is wise to limit contact with other individuals when ill.