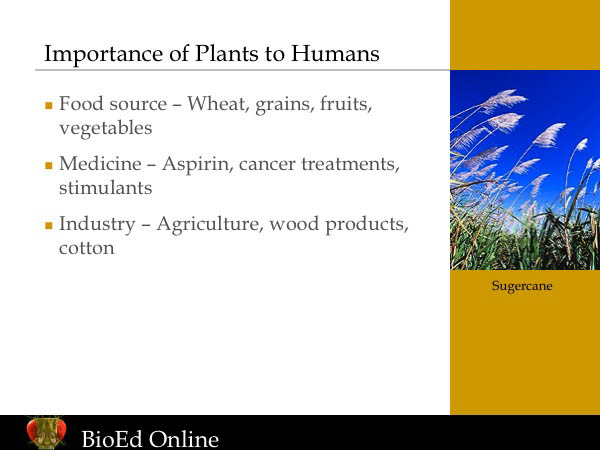 Importance of Plants to Humans

Animals, fungi and some protists, and bacteria are dependent on plants for food and oxygen. Humans have used plants for medicinal purposes since the emergence of the human mind, from about 1 million to 100,000 years ago. Today, medicines from plants include heart medications, pain relievers, decongestants, stimulants, and drugs for treatment of cancer.

Plants provide raw materials for construction and many kinds of manufacturing. Industrial uses for plants are numerous; for example, agriculture is a vital industry throughout the world, and wood is the next most valuable resource. Just stop for a minute and think of all the products made from wood: paper, rayon, cabinets, guitars, toys, framework for houses, just to name a few. Wood still is used as fuel for heating and cooking in many parts of the world. Cotton is one of the world's most important fibers.

It is important to think about plant diversity and the problem of extinction. Many plants are lost every day to exploding human populations and to the destruction of natural habitats to make room for human settlements. According to E.O. Wilson, a leading voice for the preservation of biodiversity, ninety-nine percent of all species that ever lived are now extinct. "An awful symmetry of another kind binds the rise of humanity to the fall of biodiversity: the richest nations preside over the smallest and least interesting biotas, while the poorest nations, burdened by exploding populations and little scientific knowledge, are stewards of the largest," he said. Wilson wrote that biological diversity is the key to the maintenance of the world as we know it.