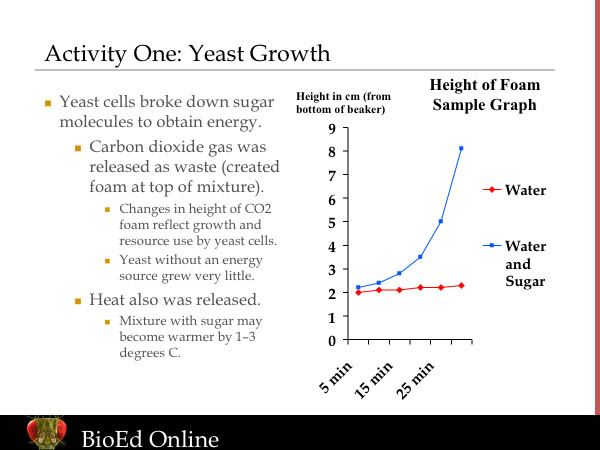 This activity provides two different kinds of evidence that yeast were metabolizing sugar for energy. First, in the container with sugar, the yeast produced CO2 gas, which was observable as bubbles and foam at the top of the mixture. Second, the temperature of the yeast and sugar mixture rose. (Depending on room temperature, sensitivity of the thermometer and other variables, a temperature change may not always be observable.)

The growth of the layer of bubbles or “foam” at the top of the mixture of yeast and sugar appears as a curve, instead of a straight line. The curve may reflect the gradual activation of the cells’ metabolism, or it may be related to actual yeast growth.

When metabolized, table sugar quickly is broken into its component monosaccharides, glucose and fructose. The breakdown of glucose, called glycolosis, converts glucose molecules into smaller molecules and, finally, into the three-carbon puruvic acid. This process takes place in the cytoplasm of microorganisms and does not require oxygen. Each step of the process is catalyzed by an enzyme. In most plant and animal cells, glycolysis is the precursor to the final breakdown of food molecules in the mitochondria. However, for many anaerobic organisms, such as yeast, which do not use molecular oxygen, glycolysis is the cell’s principal source of energy. In these organisms, the pyruvate is converted into products, such as ethanol and CO2, which are excreted from the cell.