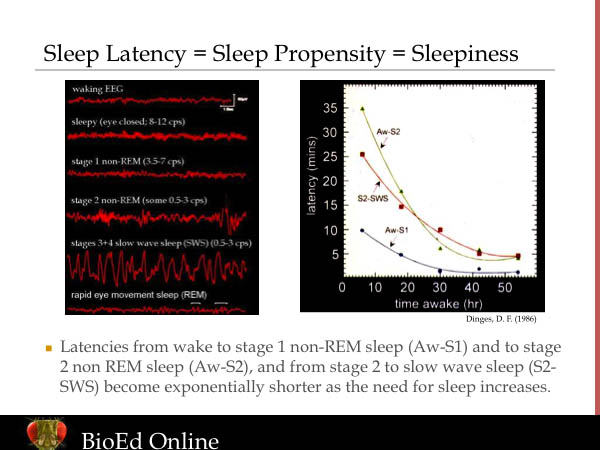 Slide Notes
During a normal night of sleep, our brain wave (EEG) patterns change frequently as we cycle through different stages of sleep, referred to as non-rapid eye movement sleep (nonREM sleep), composed of substages 1, 2, 3 and 4, and rapid eye movement sleep (REM sleep). Stage 3 and 4 nonREM sleep show patterns of high voltage slow wave sleep (SWS), indicating the midbrain’s sensory relay area (the thalamus) is no longer communicating with the upper brain’s cerebral cortex. It is at this time that we are deepest asleep. REM sleep follows nonREM sleep and shows an activated brain wave pattern almost like wakefulness, but during this stage we are functionally paralyzed, which prevents us from acting out our REM dreams. When we fall asleep at night, the brain progresses more rapidly into nonREM sleep. Thus, the time it takes us to fall asleep and to enter deep nonREM sleep is a biological indication of the sleep propensity in our brains. The higher the sleep propensity, the greater the likelihood that we will be very sleepy if we attempt to stay awake. Once sleep propensity is very high, the brain will fall asleep uncontrollably (against our will) in almost any situation, but especially when we are attempting to pay attention to tasks (for example, a lecture). It is this uncontrollable onset of sleep—sometimes called microsleeps—during waking activities that can make sleepiness potentially dangerous while driving or engaged in other safety-sensitive activities.

Transcript of Videotaped Presentation (http://www.bioedonline.org/presentations/)
Now, we have ways of measuring biologically the pressure for sleep in the brain, and one of those is actually to measure the brain waves by electroencephalography, or EEG, shown here on the left of this graph. As you can see at the top, we’ve got a graph that shows the waking, or alert, EEG. It’s very fast frequency and very low amplitude. Once the person starts to get drowsy or closes his or her eyes, you can see there is a shift in the amount of activity in the EEG. It’s slower activity. This is called alpha, and then theta is stage one, and it’s higher voltage, and ultimately, it ends up with this very high voltage, slow wave, delta sleep, shown here by the fifth red area on the left side of this slide. This slow wave stage three/four sleep is very deep, non-rapid eye movement sleep and the brain gives it a priority. When you’re sleep deprived, the brain goes into this stage of sleep very rapidly. That is to say, it transitions through these other stages rapidly to get to this deep intense sleep. We know that this intense slow wave sleep is a marker for a structure in the middle of the brain, called the thalamus, which is the relay station for all your sensory systems as they project up to your upper brain, to disconnect from the upper brain. So this is the sensory input part of your brain shutting off and no longer dialoging or interconnecting with the cortex in a functional sense. So the upper part of your brain doesn’t know that there’s stimulation coming in because it’s been disconnected, and that’s part of the mechanism of insuring that you not only go to sleep but you stay asleep. You can imagine the problems though if you progress to this sleep stage and then try to wake up abruptly and function. It’s very difficult. If you’ve ever been awakened from a very deep sleep, it’s likely that it occurred in this stage and that’s called sleep inertia. At the very bottom of the graph is the rapid eye movement sleep, the activated EEG that occurs when we dream, not exclusively in REM, but our most vivid dreams are in REM. This occurs after slow wave sleep periodically throughout the night, but we can’t act out our dreams because during rapid eye movement sleep, even though the cortex looks like it’s awake when you look at the brain waves, ironically, we are paralyzed. There are spinal motor neurons, that is, neurons in our spine; the neurons or nerve cells that control our skeletal muscles are disconnected. So we are actually paralyzed functionally during the periods of REM sleep, so we’re having vivid dreams and our eyes are jerking, we’re breathing rapidly, our brain’s activated, but we’re completely disconnected from the outside world and can’t move or act out these dreams. There are disorders where people can act out the dreams that occur late in life in neurodegenerative diseases not found in younger adults.

On the right side of the slide is the latency to fall asleep, just to make the point that, (the x ordinate is time awake) the longer people are awake, the more rapidly they fall asleep. These points are latency, or how quickly you move from a wake EEG, to a sleep EEG, to a very deep sleep EEG. And what you can see is brain wave activity accelerates towards very deep sleep so that once you’ve been awake all night, you could fall asleep in a second and you can progress into very deep sleep very rapidly. It is this characteristic of the sleep homeostatic or sleep propensity system in the brain that it accelerates towards sleep uncontrollably and rapidly when there’s slight sleep pressure that makes sleepiness so dangerous for driving. Because if you give in even a little bit to it you may find you can’t pull out of the sleep that your brain goes into and you crash. I’ll talk more about that in a minute.