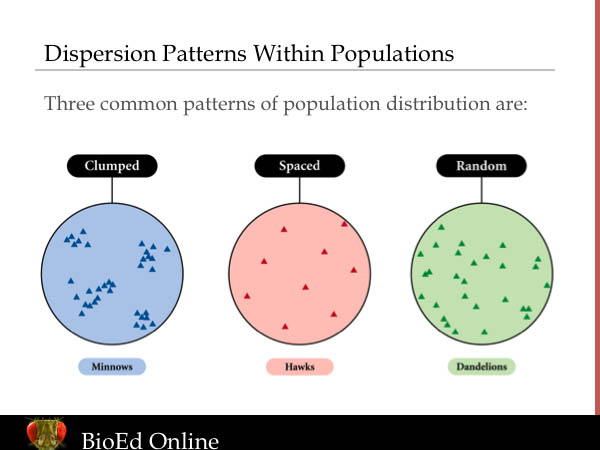 The arrangement, or dispersion, of individuals in relation to one another within a given area is one key characteristic of population study, as it reflects interactions among the population and the environment. Three patterns of population dispersion are clumped, evenly spaced, and random.

The most frequent pattern of distribution in a population is clumped. Individuals are clustered together in groups in response to uneven distribution of resources, tendency of offspring to remain with parents, or some type of social order. Clumping also may be linked with defense (safety in numbers) or mating behavior. In plants, soil type, availability of water or the manner in which the plant reproduces may favor clumped distribution patterns.

Evenly spaced distributions, in which members of the population maintain a minimum distance from one another, generally indicates strong intraspecific competition. In plant populations, this could result from competition for water, sunlight, or available nutrients, while among animals, even spacing indicates strong territoriality.

Random spacing is the least common pattern of distribution found in populations. It usually occurs because members of a species do not frequently interact with one another or are not heavily influenced by the microenvironments within their habitat.