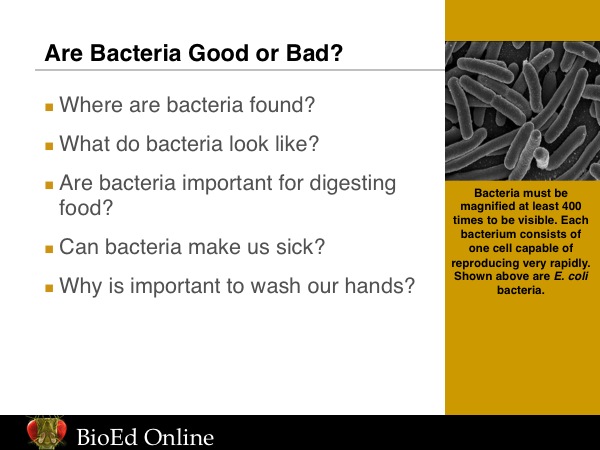 Are Bacteria Good or Bad?

Begin this activity by asking the class, Are bacteria good or bad? Help students understand that some bacteria can be harmful to humans and animals, while other bacteria are helpful. For example, bacteria growing on spoiled food might make us sick. However, bacteria in our intestines play an important role in helping to break down large food molecules during digestion.

Tell students that this activity will focus on bacteria—tiny microorganisms present everywhere. Ask students to mention what they know or have heard about bacteria. List their ideas on the board.

Point out that bacteria are a major source of food contamination, and mention that students will grow bacteria and investigate where they might be present. Ask, Can we see bacteria? How might we be able to find out where in the classroom or the school has the most bacteria? Tell students that one way to study bacteria is to let them grow until they form a clump that is large enough to see.