What Is Soil Made Of? 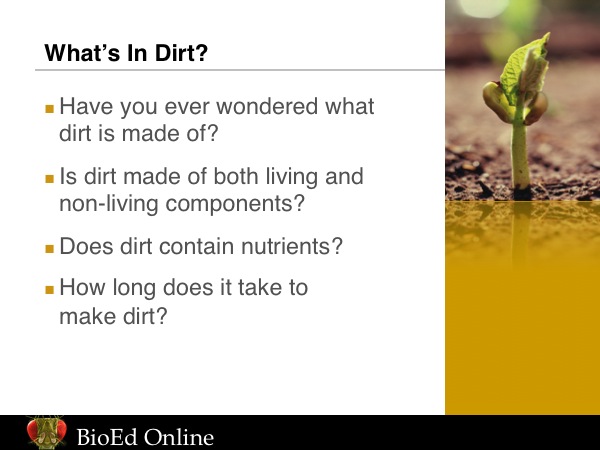 To focus students’ attention, begin by asking if they have ever wondered what’s in dirt. Then ask, Does dirt have both living and non-living components? Lead a class discussion about some types of living and non-living things that might be found in soil. Examples may include tiny rock particles, decomposed plant and animal material, bacteria, fungi, algae, earthworms, insect larvae, and plant roots.

Next, ask, Does dirt contain nutrients? Tell students that dirt does contain nutrients, such as nitrogen, phosphorous, and potassium, which are important not only for supporting plant growth, but also for assuring that other organisms are able to grow and survive. Finally, ask, How long does it take to make dirt? Tell students that soil formation takes a very long time—up to 20,000 years to make 2.5 cm of topsoil. This is only as deep as a quarter standing on its side!