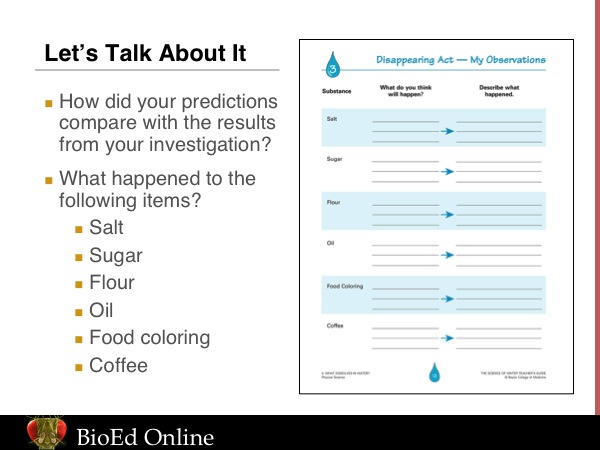 Let's Talk About It

This activity affords students an opportunity to learn about water’s ability to dissolve several common household substances and to begin to build an understanding of some basic physical science concepts, such as polarity of molecules. The forces of attraction of water molecules pull certain types of molecules (such as table salt) apart, or allow some substances (such as alcohol) to mix evenly with water. In addition, this activity provides practice in making and recording observations. After students have had an opportunity to complete their observations, review each question on the student page and discuss students’ responses as a class. When conducting a class discussion, expect a variety of answers and observations, and use questions to encourage students’ thinking.

Students should have found that both sugar and salt disappeared or dissolved in the water. Remind students about the “sticky” nature of water and how tiny units of water (molecules) are attracted to one another like small magnets because they have a positive end and negative end. The “sticky” or polar nature of water molecules pulls apart or separates other substances that also have a positive and negative end so that they mix evenly with the water.

You may find that students have a hard time deciding if the flour dissolved in the water. To help students, remind them that in order to judge if a substance has dissolved, the resulting mixture must be clear or at least transparent. Students should have found that when flour is mixed with water, the result is a cloudy mixture. The flour did not disappear or dissolve. The particles of the flour in the water mixture were greater in size than the particles of salt and sugar in the previous steps. In fact, with salt and sugar, the mixing that occurred was at the level of molecules.

The oil did not dissolve in water. The tiny oil particles found in the teaspoon of oil have a relatively neutral charge. Since the attractive forces among the water molecules are much stronger, the water molecule “prefer” to stick to each other than to mix with the oil. The oil remains separate from the water and does not disappear or dissolve. In addition, the oil is less dense that the water and will float on the surface of the water.

The addition of food coloring (which consisted of a chemical colorant already dissolved in water) to the water resulted in a transparent mixture. It did not clump up like the oil, and unlike the flour mixture, light easily passes through.

The coffee may have surprised some of your students; perhaps they thought it was instant coffee and would dissolve. Instead it was ground coffee beans. Coffee beans are made of many different substances. Some of the particles in coffee will dissolve in water as demonstrated by the transparent brown color of the water. Other substances in the coffee are too big or consist of oils that will not mix with water.

To recap ask, Which substances disappeared into the water when it was stirred? Is the salt or sugar still there? How could you find out? Were there any surprises?