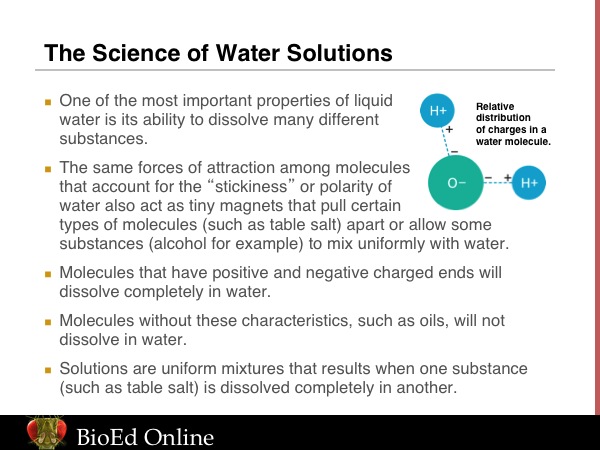 The Science of Water Solutions

Properties of water are related to the structure of the water molecule. Each water molecule consists of two hydrogen atoms and one oxygen atom. As with all molecules of this type, the oxygen atom and the hydrogen atoms share electrons. However, the electrons are not shared equally. They are pulled toward the oxygen side of the molecule, which ends up with a slight negative charge. Correspondingly, the hydrogen side of the molecule ends up with a slight positive charge. Each molecule in liquid water, therefore, has a positive end and a negative end.

A uniform mixture that results when one substance (such as table sugar) is dissolved completely in another substance (such as water) is called a solution. There is a point at which a solution will not dissolve more of the introduced substance. At this point the solution is said to be a saturated. Many common items are solutions. Household vinegar, for example, is a solution of acetic acid in water.

A mixture containing fine particles dispersed throughout another substance can be an example of a colloid. In the case of colloids, particles larger than many molecules (from 1–1,000 nanometers) are dispersed through another continuous medium, such as water. An easy way to distinguish many colloids (such as with flour mixed with water) from true solutions is to shine a light through the mixture. The beam of light will pass through a solution without any without any visible effect. However, when light is shown though a colloid, the beam’s path will be illuminated clearly. There are many different types of colloids. A sol is a solid dispersed in a liquid. An aerosol is a solid or liquid in a gas (fog is an aerosol). An emulsion is small globules of one liquid in a second liquid and a foam is gas bubbles in a liquid or a solid.

The properties of water that students observed in this activity are: