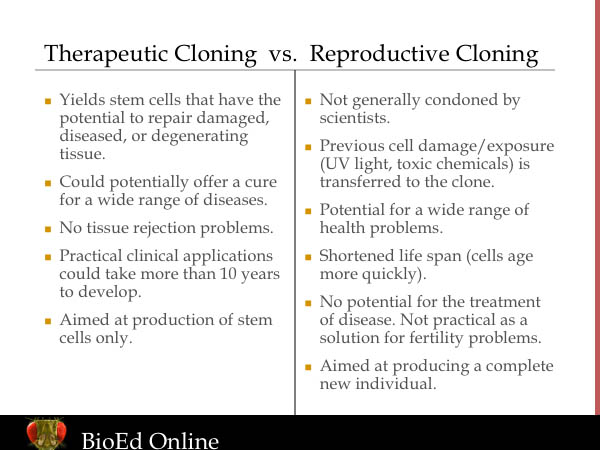 Therapeutic cloning offers a potential mechanism for repairing defective, diseased, or degenerating tissues that avoids problems associated with tissue rejection. For many disorders, a traditional transplant is not an option. Scientist hope that therapeutic cloning can one day offer a cure for a wide range of diseases, such as cardiovascular disease, diabetes, autoimmune disease, cancer, osteoporosis, Alzheimer's disease, and Parkinson's disease, as well as severe burns, spinal cord injuries, and birth defects. Therapeutic cloning does not involve reproductive cloning because development is stopped at the blastocyst stage.

Recall that in reproductive cloning, somatic cell nuclear transfer (SCNT) is used to produce an embryo, which then is implanted into the uterus of a female. The pregnancy, if carried to term, will produce an identical copy (a "clone") of the somatic (adult) cell donor. However, unlike portrayals in science fiction movies, these "clones" would not contain the same personality or memories as the donor individual. While the clone would be genetically identical, he or she would be as similar or dissimilar as an identical twin would be. His or her personality and memories would be the product of the individual environment and experiences. All of the environmental insults (such as exposure to harmful UV sunlight or toxic chemicals) to the DNA of the somatic cell will be transferred to the clone.

Another significant consideration with reproductive cloning is the associated health risks to the cloned organism and the mother. Cloned animals, from sheep to cows, have experienced significant health effects, including premature and advanced aging and a wide range of other problems, which scientists do not fully understand. Approximately 98% of all cloning attempts fail.