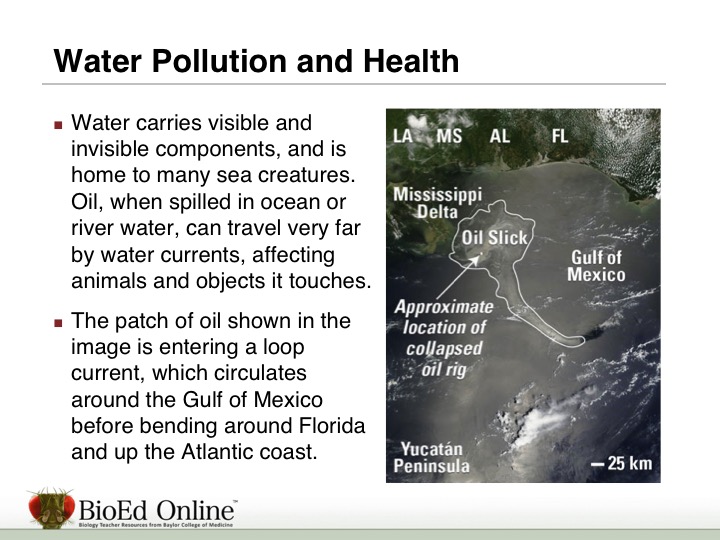 All the water on Earth ultimately forms a single, immense system. Oceans, wetlands, streams, lakes and underground water supplies all are linked through drainage patterns in watersheds and through the endless cycling of water on our planet. Because water sources are connected, pollutants travel from part of one ecosystem to another. Eventually, the contaminants can affect very distant ecosystems and populations. Water pollutants can be divided into several major categories, all of which impact human health and well-being.

Nutrients. These can come from chemical sources (fertilizers or detergents) or can be biological in origin (sewage or manure). Nutrients usually are carried into water sources by rainwater. They cause excessive growth of water plants and algae, which can clog navigable waterways and consume oxygen (needed by other organisms such as fish) when they decompose. These changes cause the decline of important lakes and wetlands, and can affect the quality of drinking water. In groundwater, fertilizers can make water from wells unsafe to drink.

Soil and sand from plowed fields, construction sites, logging sites, urban lands and areas being strip-mined. These sediments make lakes, wetlands and streams more shallow, limiting the use of waterways for transportation and decreasing the quality of wildlife habitats. Washed-off soil also can be a source of excess nutrients.

Metals (such as mercury and lead) and toxic chemicals (such as those found in pesticides, herbicides, cleaning solvents, plastics and petroleum derivatives). These substances can be poisonous to humans and wildlife. Metals and many manufactured chemicals persist in the environment. They build up in the bodies of fish and other animals, and can find their way into groundwater, making it unsafe to drink.

Heat. Warm water discharged from power plants (where water is used for cooling) can drastically alter aquatic ecosystems. Changes in water temperature can affect the quantity of oxygen in the water and can make some organisms more susceptible to disease, parasites and toxic chemicals.

Most sources of water pollution are spread over large areas. Water from rain and irrigation collects pollutants as it washes over the land or sinks into the soil. This type of pollution, which is not attributable to a single location, generally is called non-point source pollution. It is much more difficult to monitor and to control than point source pollution—which is discharged at a single place (such as from a factory or waste treatment plant, or a chemical spill)