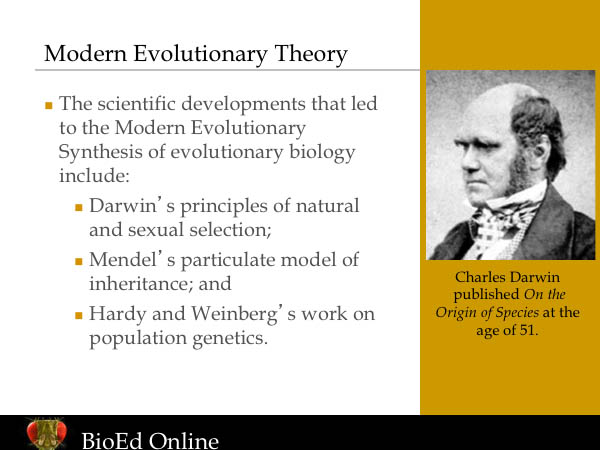 By the early 19th century, scientists had gathered enough evidence to recognize that living creatures had existed on Earth for a long time and that life had changed and diversified since its origin. However, they did not understand the processes or mechanisms that drive biological diversity (variation in life forms), or how physical traits are inherited (passed on) from one generation to the next. One of the prevailing ideas was that of "blending inheritance," which posits that offspring should look like some mixture of the two parents. While this principle had some merit, it did not explain how variation persists in different populations over time. Under the blending inheritance model, all individuals within a given population eventually should end up looking alike. Clearly, this is not seen in nature.

With the publication of On the Origin of Species in 1859, Charles Darwin changed the way naturalists and other scientists thought about the diversity seen in nature. Darwin hypothesized that all living things are descendants of one or a few common ancestors and that diversity arises through the process of evolution, which is driven by natural and sexual selection.

Darwin described how natural and sexual selection caused variation to arise in nature, but the genetic mechanisms underlying these processes still were not understood. It was Gregor Mendel, an Augustinian monk who was working around the same time as Darwin, who solved this part of the puzzle. Through his experiments on pea plants, Mendel arrived at a model of "particulate inheritance" that explained how variation can be inherited and maintained over time.

Statistical models developed by G.H. Hardy and Wilhelm Weinberg helped to merge and fill out Darwin's and Mendel's observations into what is often referred to as "The Modern Synthesis" of evolutionary theory. This presentation covers these topics in detail.

Note: in lay terminology, the word "theory" often is used as a synonym for a hunch or guess. Consequently, people sometimes misinterpret the phrase "evolutionary theory" to mean some kind of guess that lacks critical support. In scientific terminology, however, a theory is a well-developed integration of observations, experiments, and interpretations. Scientists use the word "hypothesis" to refer to a "possible explanation" that remains to be tested.