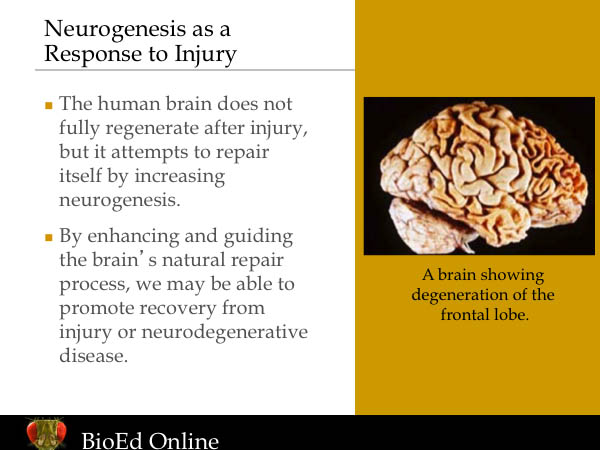 Neurogenesis as a Response to Injury

The discovery of adult neurogenesis also has uncovered the exciting potential for novel approaches to treating brain and spinal cord injuries. Some animals, such as lizards and goldfish, can regenerate entire segments of their injured nervous systems. While the human brain clearly does not have this capacity, it does appear to have greater regenerative ability than was previously believed. In fact, many studies have shown that neurogenesis is stimulated in the mammalian brain in response to injury and disease. For example, experiments in rodents have demonstrated that new cells are generated in response to brain injury caused by a stroke. Those new cells can migrate to the site of the injury in the cerebral cortex (where neurogenesis does not normally occur) and differentiate into mature neurons that form connections with neighboring cells. There are also reports of enhanced neurogenesis in the human brain in response to stroke as well as Huntington’s disease and Alzheimer’s disease. This injury-induced neurogenesis does not lead to recovery,  but many scientists believe it represents the brain’s attempt to repair itself. This creates hope that we can learn how to enhance and guide the brain’s existing repair process. Naturally, this will not be an easy undertaking. It will require an understanding of how to stimulate the generation of new cells, direct their migration to areas that require repair, and control their differentiation into the appropriate kind of neuron. It may also be necessary to manipulate the natural environment of the adult brain to make it more conducive to regeneration. In addition, problems may arise if new neurons do not integrate properly into the existing network of nerve cells. Still, these discoveries raise the hope that we will one day learn how to guide the brain’s natural response to injury for therapeutic use.