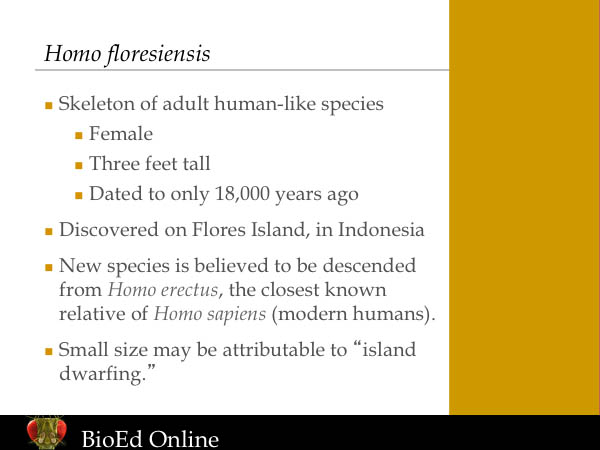 The recent discovery of the skeleton of a three-foot tall adult female belonging to a new human-like species, Homo floresiensis, is exciting news to anthropologists. The new species, named after the island on which the skeleton was discovered, appears to be descended from populations of Homo erectus, the closest known relative of modern humans. The skeleton was estimated to be 18,000 years old. This means that populations of Homo floresiensis existed well after modern man appeared approximately 160,000 years ago. Thus, researchers are wondering if the two species interacted.

The first descendents of Homo floresiensis to reach Flores Island may have been similar in size to Homo erectus. Researchers hypothesize that the small size of Homo floresiensis (only three feet tall) is due to a process known as "island dwarfing." This phenomenon  has been observed in other mammals, where local isolation, absence of predators, and small population sizes, combined with restricted resources, lead to reductions in body size and modifications in brain size. The smaller individuals with reduced energy requirements are favored by natural selection in environments where food is limited and there is no need for defense against predators. In a small population with a limited gene pool, these changes could occur quite rapidly.