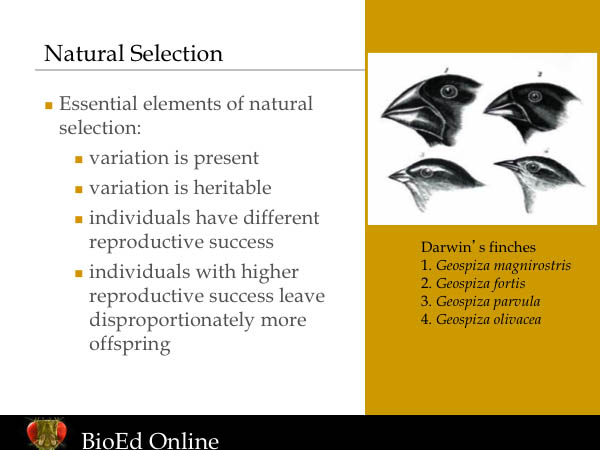 Darwin spent many years collecting evidence from different sources to support his theory that evolution occurs through the process of natural selection. He carefully studied specimens that he and others had gathered from around the world, including several different species of finches from the Galapagos Islands. Darwin recognized, for example, that the different types of beaks he observed among the finches were related to different food sources and foraging patterns. Finches that fed on large seeds, for example, had thicker, stockier beaks, which contrasted with the more pointed beaks of finches that fed on cactus.

Darwin proposed that natural selection could explain how diversity-such as the diverse forms of beaks in the Galapagos finches-arises in nature. He reasoned that when environmental conditions change (e.g., alterations in temperature or sources of food), some individuals will have characteristics that allow them to continue to survive in the changed environment. These "successful" individuals will be more likely to produce more offspring than other less successful, and perhaps less well adapted individuals. Over time, the useful adaptive traits would become more common in the population, and the detrimental traits would become increasingly rare. In the example of the finches, birds with thick, stocky beaks would have a foraging advantage if the most abundant food source consisted of large, hard-shelled seeds. Individual finches whose beaks were most suited to seed eating would, theoretically, be able to consume more food. Therefore, birds with thick stocky beaks generally would be healthier and produce more offspring than individuals with less effective beaks. Over time, the population would come to be predominated by the stocky beak type.

It is important to recognize that evolution by natural selection, which many people think of as "survival of the fittest," is not strictly based on physical attributes, but rather, on differential reproductive success of individulas within a population. In a biological sense, "fitness" is equivalent to success in producing offspring that also survive and reproduce.

Darwin had little understanding of the underlying genetic mechanisms that drove natural selection. He knew, however, that for this system to work, the offspring must inherit the parent's physical characteristics. Thus, the basic elements of natural selection are that: (1) variation is present; (2) variation is heritable; (3) individuals within a population have different reproductive successes; and (4) individuals with higher reproductive success leave disproportionately more offspring.