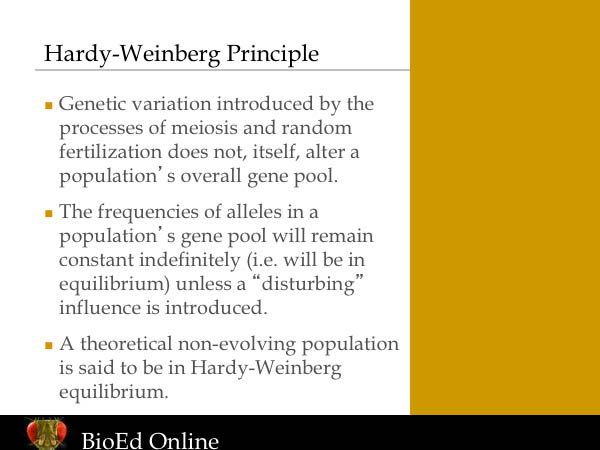 Early in the 20th century, the mathematician G.H. Hardy and the physician Wilhelm Weinberg, independently developed probabilistic models of genetic variation at the population level. The Hardy-Weinberg principle states that the gene pool of a population will remain constant indefinitely (i.e., it will be in equilibrium) unless a "disturbing" influence is introduced. In other words, the genetic variation introduced through the processes of meiosis and random fertilization does not affect a population's overall gene pool.

A theoretical non-evolving population is said to be in Hardy-Weinberg equilibrium. For a population to reach and maintain this equilibrium, it must meet specific criteria: it must be infinitely large, exhibit random mating patterns, have a constant, unchanging gene pool (no net mutation), have no migration into or out of the population, and have no natural or sexual selection occurring within the population.