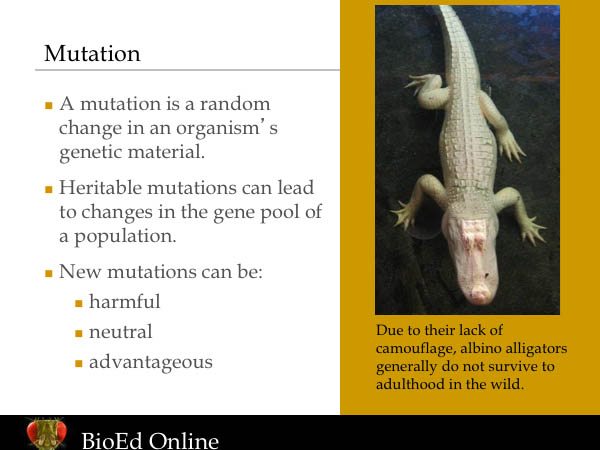 Remember that genetic variation contributes to the evolutionary potential of a population. A mutation, or a random change in an organism's genetic material, can lead to changes in the gene pool if the mutation is heritable (carried by the sperm or eggs). The word "mutation" also refers to the process by which a gene or chromosome is modified. Although they are relatively rare occurrences, mutations can introduce new alleles into a population and, therefore, provide raw material for the evolutionary process.

Because mutation is a random event, new mutations can be either harmful, neutral, or advantageous. Harmful mutations, like the albino alligator depicted in the figure, confer lower fitness (reproductive success) to an individual. Neutral mutations have no net effect on the fitness of an individual. Advantageous mutations increase fitness, providing an advantage to an individual. The frequency of an allele that confers a fitness advantage is likely to increase in a population.

Mutations only have evolutionary consequences if they are passed on to the next generation. Examples of types of mutations include changes in DNA sequence at specific locations (point mutations), sequence changes as a result of recombination, and changes caused by transposable elements (copies of DNA sequences that become inserted into different sites in the genome).