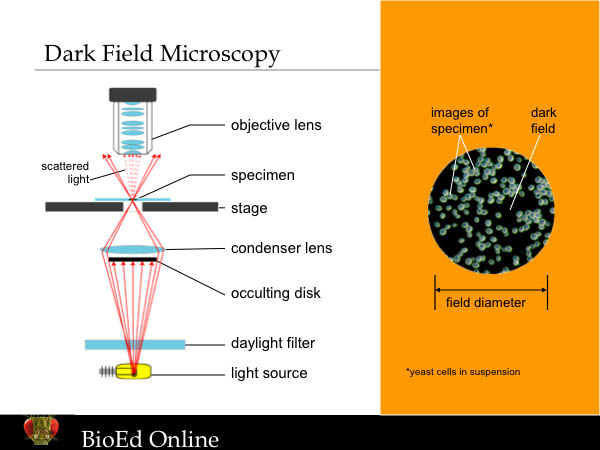 Magnification is usually not a problem when looking for the specimen. The smallest known living things are the bacteria, and the smallest of bacteria can be seen at 40x total magnification, which is typically the lowest magnification on a compound microscope. The issue is contrast. Living bacteria are essentially invisible in bright field because they are too small to absorb or scatter sufficient light to be detected. Living bacteria are readily detected in dark field.

The term "dark field" refers to the fact that specimens appear as bright images against a nearly black background. To obtain dark field imaging, an opaque (occulting) disk is placed in the light path on the opposite side from the specimen. The disk blocks light from traveling directly through the condenser to the objective lens. The only light that can reach the condenser lens is light that passes around the edges of the occulting disk. For a given objective, the disk is sized so that light that does pass around the edges and is transmitted through the specimen cannot reach the objective lens.

Light that passes through a clear area of a specimen will travel in a fairly straight line and shoot right past the objective lens. If there is any object in the way, no matter how small, it will scatter some of the light. Some of the scattered light will be diverted into the objective lens, making the object visible as a bright object against a dark background. Because dark field optics rely on scattered light, one generally needs the maximum illumination intensity possible. Dark field should not be used for color determinations such as Gram stain interpretation, because scattered light will be of a different wavelength than the incident light. A true pink may appear purple, for example, and a purple stained object may appear pink or even gold colored.