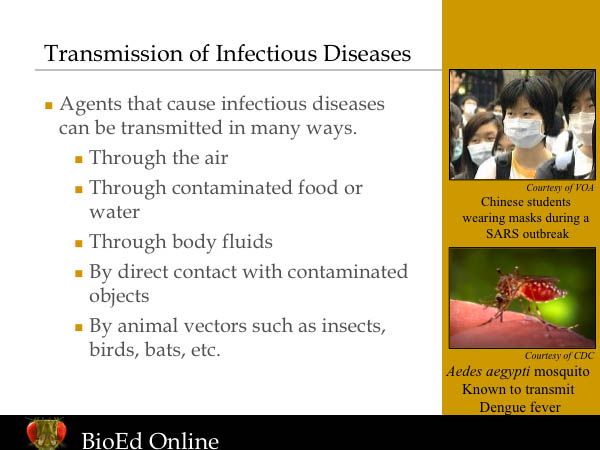 There are many ways that infectious diseases can spread. Pathogens usually have specific routes by which they are transmitted, and these routes may depend on the type of cells and tissue that a particular agent targets. For example, because cold viruses infect the respiratory tract, they are dispersed into the air via coughing and sneezing. Once in the air, the viruses can infect another person who is unlucky enough to inhale air containing the virus particles.

Agents vary greatly in their stability in the environment. Some viruses may survive for only a few minutes outside of a host, while some spore-forming bacteria are extremely durable and may survive in a dormant state for a decade or more.

As noted, some diseases, such as colds, the flu and tuberculosis, spread through the air when an infected person coughs or sneezes. Another route or transmission is through ingestion of contaminated food or water. Water- and food-borne illnesses can be caused by bacteria, viruses, or protozoa. This risk of contracting these illnesses is greatest with impure and untreated water and undercooked or improperly stored foods.

Infectious diseases can also be transmitted through body fluids, such as blood, semen, and saliva. For example, HIV easily can be passed through contact with blood and semen, however, even though the virus has been found in saliva, there are no documented cases where HIV has been transmitted by contact with saliva. Similarly, there are no known cases of transmission of HIV by mosquitoes. Additionally, infectious agents can be passed through blood and blood products during medical procedures, such as blood transfusions. Many hemophiliacs receiving blood products were unwittingly infected with HIV before the responsible agent was identified and blood donations were screened. Other people can be infected as a result of sharing contaminated needles.

Touching contaminated objects commonly leads to infection, especially among pre-school children. Fecal to oral transmission is a major path for diarrheal diseases, such as rotavirus and Norwalk virus, that are widespread in daycare centers. It is also possible to become infected with some agents by touching surfaces such as doorknobs and telephones, especially those located in public places. Pigs and birds, in particular, are known to harbor viruses that can mutate and spread to humans upon contact. Finally, pathogens can be transmitted through insect vectors, such as mosquitoes. Mosquitoes are responsible for the spread of malaria, yellow fever, and West Nile virus, among other diseases. Ticks, which spread Lyme’s disease, are another common vector.