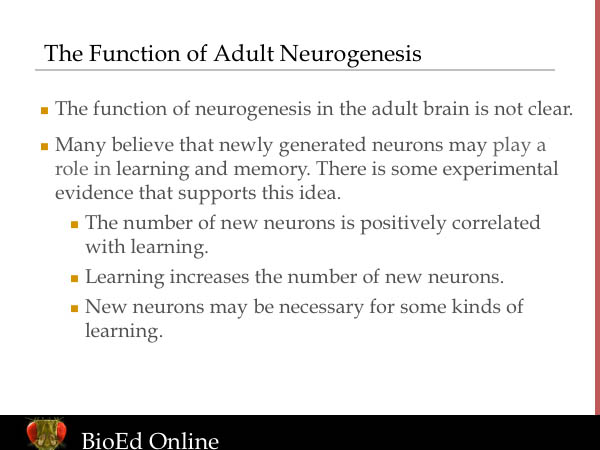 The Function of Adult Neurogenesis

A central focus of current investigations is to increase understanding of the functional significance of newly generated neurons—what they do and how they contribute to the brain’s activities. While many answers remain unknown, new insights are emerging at a stunning rate. Experimental studies of neurogenesis suggest that new neurons are not only generated throughout life, they also integrate into the circuitry of the brain and actively participate in its functions. The hippocampus is known to play a critical role in learning and memory, and many have hypothesized that newly generated neurons within the hippocampus contribute to these processes. Although currently limited, there is support for this idea. For example, conditions that decrease adult neurogenesis, such as stress, seem to impair learning. In contrast, conditions that enhance the generation of new neurons, such as physical exercise, often are associated with improved learning on tasks that rely on the hippocampus. Studies also have shown that learning promotes the survival of new neurons. In fact, better learners seem to retain more new neurons, especially when trained on difficult tasks. These findings suggest an intriguing link between neurogenesis and learning. There also is evidence that neurogenesis is not only correlated with learning but that it may actually be required for learning. By using an experimental approach to decrease the number of new neurons in the hippocampus, one study has shown that animals perform poorly on some types of learning tasks when neurogenesis is reduced. Unfortunately, the methods used in this study, and in fact all methods currently available to selectively reduce neurogenesis, are likely to have additional affects on brain function, making results less than conclusive. Nevertheless, these and other studies provide initial support for the hypothesis that newly generated neurons participate in at least some forms of hippocampal learning and memory.