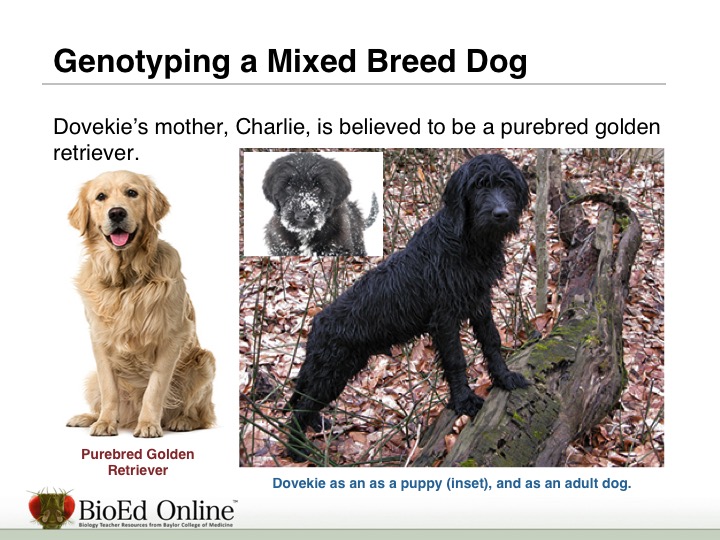 Students follow the case study of a “mutt,” whose breed identity is uncovered by its owners through commercial genotyping. In addition, students learn about variation within and among dog breeds, and the origins of common breed clusters.

As described in the previous activity, all dogs are members of the same species (Canis familiaris). Even though members of different dog breeds vary physically and even behave in different ways, all domestic dogs can interbreed and produce viable offspring. The variation among (i.e., “between”) dog breeds is the result of selective breeding over time. In many cases, distinctive traits of particular breeds are the result of the crosses between close relatives. Unfortunately, inbreeding also will consolidate undesirable traits, such as hereditary diseases. Thus, breeders and owners have considerable interest in knowing about the genetic makeup of their dogs. Breeders, for example, would like to avoid breeding dogs that can pass on genetic diseases, such as von Willebrand’s disease (an inherited bleeding disorder), to their offspring.

Several companies now provide genetic tests for many disease-causing mutations and common physical characteristics, such as coat color. In addition, genetic testing can provide insights into the ancestry of mixed breed dogs. This information is useful to owners, who would like to know if their dog has hidden disease tendencies or has ancestors with particular behaviors (such as herding or barking).

Genetic testing does not examine the entire genome of an individual. Instead, it looks for irregularities in the chromosomes themselves, changes in specific sections of DNA or even proteins that are associated with a particular trait or disease. The dog genome is divided into 78 chromosomes, with 38 pairs of non-sex chromosomes and a pair of sex chromosomes. Sex in dogs in determined the same way as in humans: females have two “X” chromosomes (one from each parent) and males have one “X” and one “Y” chromosome. The DNA is chromosomes stays in a tightly wound or bunched state, until a section is “unwound,” to enable the DNA to be read.

In this activity, students will learn how one family used genetic testing to uncover the ancestry of an unusual puppy. In addition, they will examine the relationships among common clusters of dog breeds, and investigate the characteristics of different breeds.

1. Project this slide to the class. Play the NPR radio story found at the link below. Or download the transcript and have students read the story.

2. Encourage a discussion by asking the following questions, Have you heard about genetic testing before? What does genetic testing examine? Do you think they will be able to figure out who Dovekie’s parents are? Tell students that genetic tests can be developed to identify unique hereditary information, and that genetic information often is used to understand relationships among different families or groups. Remind students that most organisms (including humans and dogs) have two sets of genetic information, with a single set coming from each of the individual’s two parents. This information is carried on DNA molecules (students will learn more about this process in Activity 3).