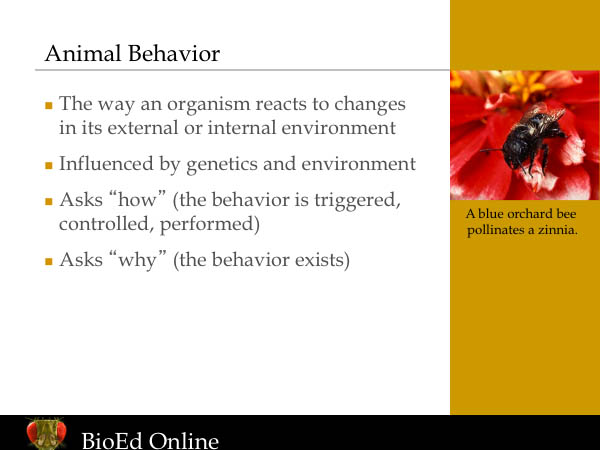 Behavior encompasses anything that an organism does, including voluntary actions and responses to stimulation (internal or external). The study of animal behavior involves investigating the relationships animals have with their physical environments and with other organisms. Examples of animal behavior studies could include research to determine how animals find and defend resources, communicate, avoid predators, choose mates, reproduce and care for their young.

Animal behavior has both genetic (polygenic in many cases) and environmental components. Some behaviors develop similarly, regardless of the environment, while others develop differently in different environments.

When studying behavior, it is important to identify both the behavior and the related stimulus (internal or external) that initiates or controls it. Ultimately, this leads us to ask why the behavior exists, and what evolutionary significance it might have (for example, how did it influence the species' survival and reproductive success?).

Ethology, the study of the evolution and functional significance of behavior, originated in the 1800s with C.O. Whitman, who studied display patterns in pigeons. Much of the work of early ethologists was unified by two Nobel Laureates, Niko Tinbergen (identified four areas of study: the behavior itself, along with its cause, development and evolution) and Konrad Lorenz (who conducted studies on imprinting). A third Nobel Laureate, Karl von Frisch, pioneered studies in bee communication and foraging. The ethological approach typified by the research of Lorenz, Tinbergen and von Frisch was largely concerned with the behavior of organisms as it is expressed in their natural environments.