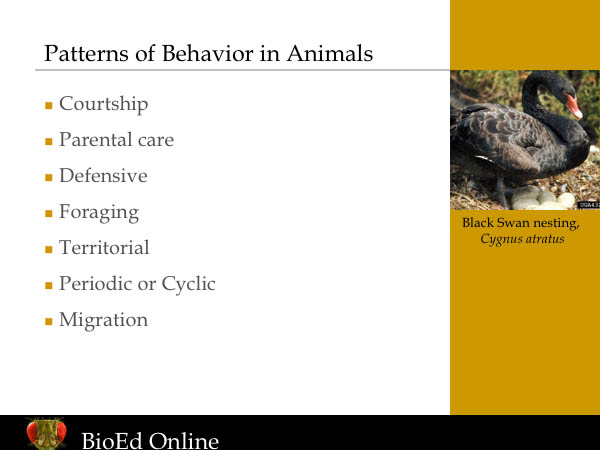 Patterns of Behavior in Animals

Behavior in animals can be related to courtship and mating, caring for young, defense, obtaining food, establishing or maintaining territory or periodic cycles.  Successful behaviors promote survival of the individual animal and its future generations.

Courtship consists of behaviors that help members of the same species identify and select potential mates. Sexual selection is an evolutionary mechanism in which some traits increase an individual's chance of mating and passing along its genetic information.

Parental care, if present, is usually provided by the female. This may allow successful and perhaps healthier males to maximize their reproductive output. Reproduction and care of offspring requires a great deal of energy, and the number of offspring produced at any one time is usually inversely proportional to the amount of energy invested in parental care.

Defensive behaviors involve protection of the individual. In some animals, it also involves protection of offspring, mates and territory.

Foraging behaviors relate to the ability of the animal to locate, obtain and consume food.

Territorial behavior typically relates to feeding, mating and/or caring for offspring.  A territory can vary widely from species to species. While the location is generally static, the size of the territory varies depending on the species and available resources.


Many animals respond to periodic changes in the environment with daily or seasonal cycles of behavior. Daily patterns, such as sleep cycles, are referred to as circadian rhythms and are related to the Earth's 24 hour day-night cycles. Other periodic behavior can be linked to changes in the length of day and night, or of temperature.

Migration is the regular, recurrent, seasonal movement of populations from one geographic location to another and back again. Many species of fish, mammals, and even insects take amazing migratory journeys, but birds, as a group, are the most mobile creatures on Earth. In general, migrating animals use one or more of three mechanisms: piloting, orientation and navigation. Piloting involves use of familiar landmarks and usually is used to locate nearby destinations. In orientation, an animal detects compass directions and travels in straight-line pathways. Navigation, which is the most complex mechanism, involves being able to determine the present location, and then the use of compass direction to travel in the desired direction. Some animals use the Earth's magnetic field, the sun, or the stars for navigation.