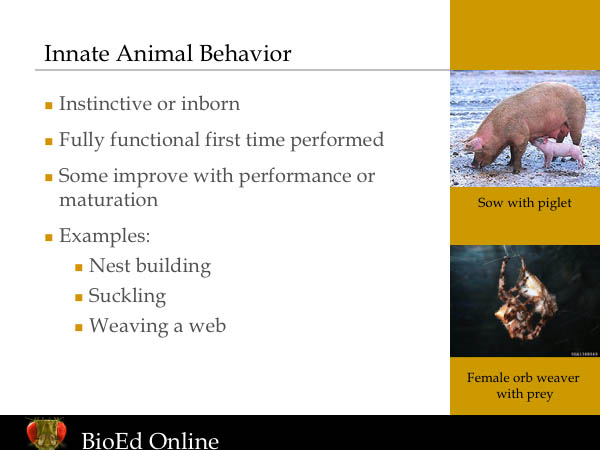 Even though it is useful to think of behavior as being strictly genetic (inborn) or strictly learned, the line between these two types of behavior is blurred. Even a rigidly automatic behavior depends on the environmental factors for which it evolved, and most learning is guided by internal neural programs.

In general, instinct is considered to consist of heritable, genetically specified behavior organized and guided by circuits in the nervous system. In other words, innate or instinctive traits are those existing in, belonging to, or determined by factors present in an individual from birth. In the 1800s, C.O. Whitman coined the term "instinct" to describe behaviors he observed in pigeons. Innate behavior is that which appears to be developmentally fixed, meaning a particular behavior occurs in all members of a species, regardless of environmental influences. Innate behaviors are present at birth and do not require experience or practice, but do require a stimulus. Many of these behaviors improve with practice or physical maturation. Examples of innate behavior include hibernation in black and brown bears, nest building in birds, web weaving in spiders, and mating in all animals.