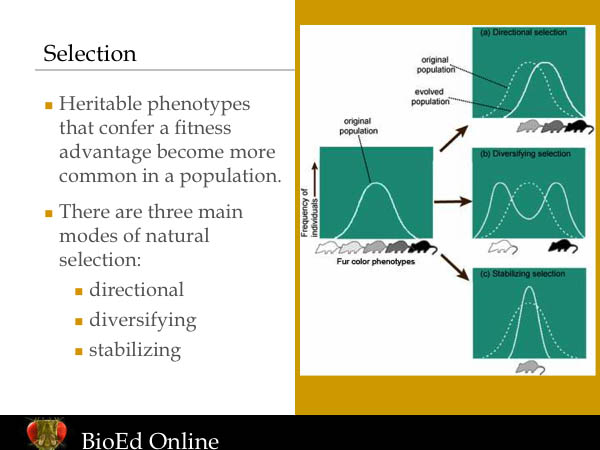 Selection is one way that genetic shifts in populations (evolution) occur. Through natural selection, traits (and the alleles that confer those traits) that are beneficial to reproductive success become more common in a population, while those that are detrimental become increasingly rare. There are three main modes of natural selection: directional, diversifying, and stabilizing.

In directional selection, individuals with one extreme phenotype exhibit an advantage in fitness (reproductive success) over the others. In time, the mean (average) of the population shifts toward that extreme phenotype (see figure "a"). For example, if dark fur helped mice absorb heat from the sunshine on a cold winter day, and thereby gave them a survival advantage, a disproportionate number of their dark fur alleles would be passed on from generation to generation. The mean coat color of the population would shift to darker and darker values over time, thereby increasing the proportion of individuals with good warming features.

Under diversifying selection, individuals with extreme phenotypes at either end of the spectrum (the lightest and darkest coats in this example) have higher fitness than those with the average phenotype, and thereby pass on a larger number of alleles to descendent generations. Through time, the distribution of the phenotype within the population changes such that most individuals exhibit one of the extreme phenotypes. Figure "b" illustrates this process. Mice with the darkest or lightest coats have higher fitness than those with medium coat colors, and therefore, become more common in the population.

In stabilizing selection, individuals with the average phenotype have higher fitness than those with the extreme phenotypes. In this scenario, the range of phenotypes decreases over time (see Figure "c"). Mice with average coat color have higher reproductive success, perhaps because their plain fur helps them hide them from predators. Their fitness results in a disproportionate number of alleles for the average coat color being passed on to future generations. In contrast, mice carrying alleles for extreme coat colors eventually would be weeded out because, in this example, they are easier targets for predators and thus, less likely to reproduce.

Populations under selection pressures will have changes in allelic frequencies and will, therefore, deviate from Hardy-Weinberg expectations.