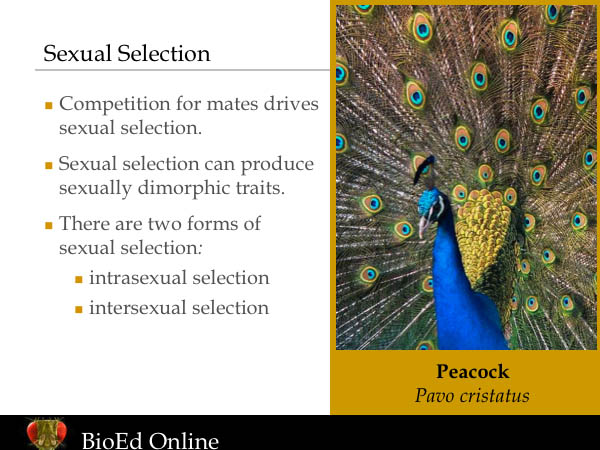 Darwin expanded his principle of natural selection to explain sexually dimorphic traits (features that differ between the sexes), including why, for example, males of many species tend to have more showy traits, while females often are comparatively drab. Darwin proposed that competition for mating opportunities drives the process of sexual selection as long as the fitness benefits conferred by this selection outweigh the costs imposed by natural selection. For instance, elaborate male traits, such as the spectacular train (tail coverts) of the male peacock, are clearly important to attracting females during courtship. However, the large elongated train increases susceptibility to predators by reducing the males' flight capability. In contrast, peahens (female peacocks), for whom the males are competing, are relatively drab, and blend more successfully with their environments. Females are less vulnerable to  predators, particularly during nesting season. Darwin noted that since females and non-breeding males lack exaggerated colors or displays, these features of breeding males probably are disadvantageous.

There are two basic forms of sexual selection: Intrasexual and intersexual. Intrasexual selection is driven by direct competition among members of one sex. This can involve contests between males of a species to gain mating opportunities with females. Such male-male combat is found among deer, for example. Competition between males also may take place during reproduction. In some species, sperm from more than one male may compete to fertilize the female's eggs. In contrast, intersexual selection is driven by abilities of one sex to attract the attention of the opposite sex and be chosen as a mate. Females generally drive intersexual selection, as they choose males with which to mate based on "attractive" features, such as the showy courtship display of the peacock, or other features, such as size or vocalizations, or dominance of other males.