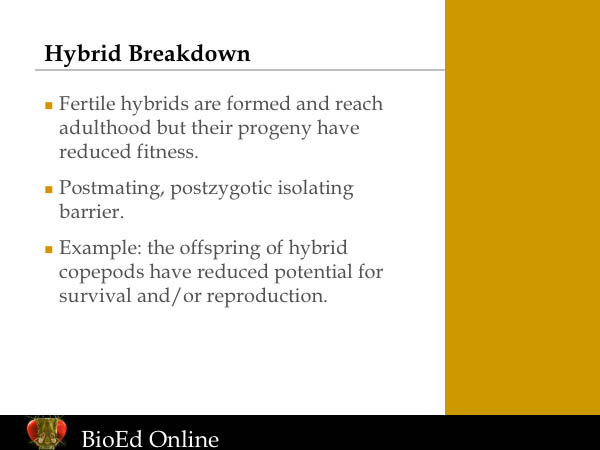 In some cases, the first generation of hybrids (the F1 generation) are fully viable and fertile, but their progeny have reduced fitness (reproductive success). This isolating barrier, known as hybrid breakdown, limits the amount of genome mixing that will occur between two populations.

A proposed explanation for hybrid breakdown is that different species evolve different combinations of genes, or "gene assemblages" that work together synergistically to create maximum levels of fitness. Because individuals in the F1 generation inherit these complementary assemblages, they exhibit fitness levels that are comparable to those in the pure-bred species. In subsequent generations, however, recombination breaks up the assemblages, producing incompatible gene associations, resulting in reduced fitness.

Intertidal copepods on the Pacific coast exhibit hybrid breakdown. The F1 hybrids can have fitness levels comparable to pure-bred members of the parental species, but the F2 generation (formed by crossing the F1) is frail and exhibits a greatly reduced potential for survival and reproduction.