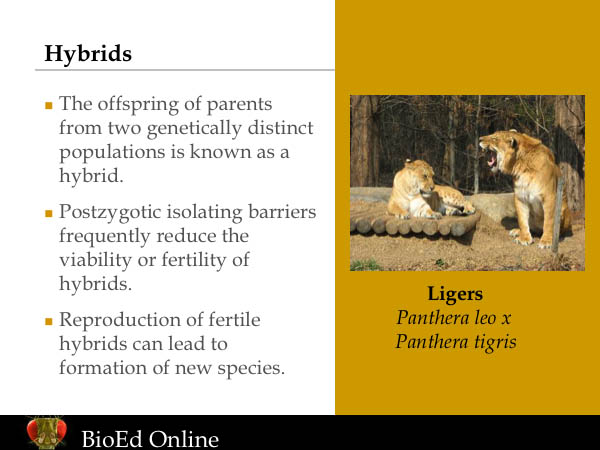 The reproductive isolation mechanisms discussed so far are all examples of prezygotic isolation, where gene flow between species is prevented often before mating can occur and before a zygote can form. In contrast, postzygotic isolation occurs after members of two different species have mated and fertilization has occurred. The offspring of such crosses are called hybrids. In most cases, the viability or fertility is reduced, and can be considered a postzygotic isolating barrier.

Sometimes, however, hybrid offspring and their progeny are viable and fertile. When successful hybrid populations arise, the lines between existing natural species or new species (particularly in plants) can become blurred.

For example, as we discussed previously, lions and tigers rarely meet in their natural environments. However, if held together in captivity, they will interbreed. A liger is the offspring of a male lion and a female tiger, and a tigon is a hybrid between a male tiger and a female lion.