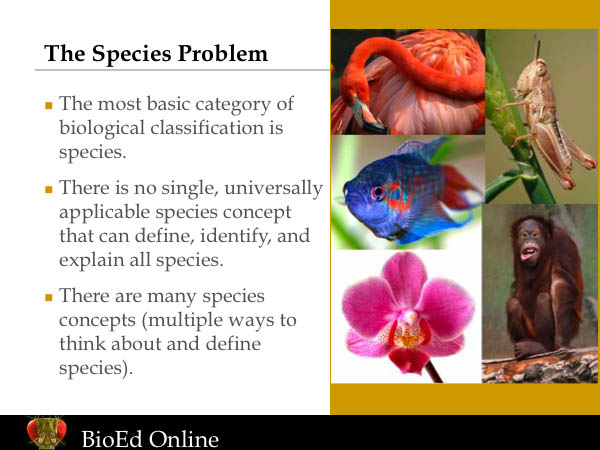 Although scientists generally agree that species represent the most basic and fundamental groups into which living and extinct organisms are classified, there is debate over how species should be identified as well as the precise definition of the word "species." This controversy, known as the species problem, stems from the quest for a single, universal, and functional conception of species. This "essential species concept" would have to identify species unambiguously as discreet, natural units in addition to explaining the existence of species and how they arise in nature. While a number of different species concepts have been proposed, none are able to meet these requirements for all species.

In response to this problem, many scientists recommend a pluralistic approach, that is, the recognition that there are multiple ways to think about and define species. Investigators must therefore choose an appropriate species concept based on their needs. For example, a paleontologist who tries to understand prehistoric vertebrates by studying fossils is likely to require and apply a different conceptualization of species than a microbiologist who studies heredity and variation in populations of bacteria.