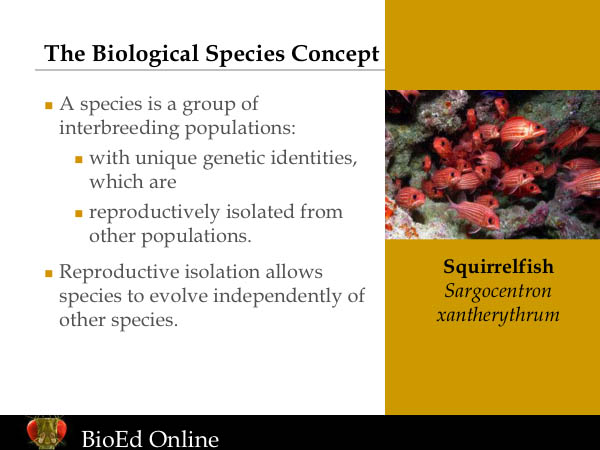 Scientists working to understand evolution and speciation (the processes by which species arise), frequently apply the biological species concept. Ernst Mayr, one of the leading evolutionary biologists of the 20th century, provided the most commonly accepted version of the biological species concept, which posits that "species are groups of interbreeding natural populations that are reproductively isolated from other such groups."

Mayer's work focused on vertebrate animals, a group for which the biological species concept is particularly useful. It also has been applied to plants and other populations. However, most plant biologists also consider evolutionary history and morphology in their species definitions. The biological species concept defines species in terms of interbreeding populations, and is therefore most useful for understanding organisms that reproduce sexually. For these organisms, the formation of a new species involves the accumulation of enough genetic differences within individuals of a population to prevent them from breeding with individuals of other populations - a condition referred to as reproductive isolation. When reproductively isolated, species accumulate genetic changes and evolve along independent trajectories. Without reproductive isolation, populations merge in a genetic sense (they share a common gene pool), and thus converge (become similar) in an evolutionary sense.

Many biologists do not interpret the biological species concept rigidly, and characterize species as populations with “substantial but not necessarily complete reproductive isolation” (Coyne and Orr, 2004).