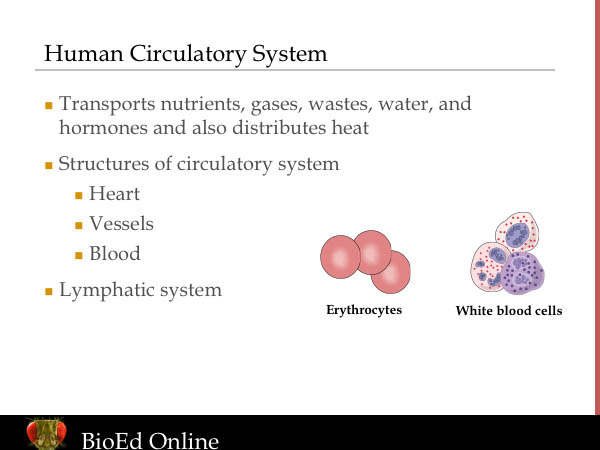 The circulatory system distributes materials to and from all regions of the body and plays a role in regulating temperature. Blood transports oxygen from the lungs to cells of the body while metabolic wastes, including carbon dioxide, are removed from body cells and delivered to organs that eliminate them from the body. Nutrients are picked up from the digestive system and distributed throughout the body, along with hormones, vitamins and minerals. The circulatory system facilitates distribution of heat to maintain a relatively constant body temperature.

The human circulatory system consists of the heart, a series of blood vessels and blood. Made primarily of cardiac muscle, the heart serves as two separate pumps, one for pulmonary circulation and the other for systemic circulation. Valves control the directional flow of blood through the heart and prevent backflow. The average heart rate ranges from 60 to 70 beats per minute initiated by the sinoatrial node, or pacemaker, which is found in the wall of the heart. William Harvey (an English physician) demonstrated the function of the heart and complete circulation of the blood in 1628, laying the foundation for modern medicine.

Blood vessels of the circulatory system consist of arteries, veins and capillaries. The largest artery is the aorta and the smallest arteries are arterioles. Arteries are muscular, transport blood away from the heart, and, with the exception of pulmonary arteries, contain oxygenated blood. Arteries expand and recoil under pressure (creating what we call "pulse") because of the elastic connective tissue in the walls. Veins are thinner and less muscular than arteries and return blood to the heart. With the exception of the pulmonary veins, veins transport blood low in oxygen. Many veins contain valves to prevent backflow of blood. Capillaries are one cell in thickness. This allows for the essential exchange of materials between the blood and cells of the body.

Blood is a connective tissue consisting of a liquid matrix, called plasma, and a solid, cellular portion. Plasma is approximately 90% water and 10% solutes (nutrients, wastes, vitamins, hormones, gases, ions, and plasma proteins, which maintain osmotic pressure). The cellular portion of the blood is made of red blood cells (erythrocytes), which transport oxygen; white blood cells (leukocytes), which aid in defending the body from infection; and platelets, which are important in blood-clotting reactions. In humans, erythrocytes do not have a nucleus as mature cells but do contain hemoglobin, an iron-containing pigment which binds and transports oxygen. Normally, less than 1% of the cells in human blood are white blood cells. They have nuclei and are larger than red blood cells. Neutrophils, eosinophils, and basophils are granular leukocytes, while monocytes and lymphocytes are non-granular. Platelets are pieces of cytoplasm, which are pinched off cells called megakaryocytes.

Some of the fluid in blood, along with several plasma proteins, moves into the tissues and is returned back to normal circulation by the lymphatic system. The lymphatic system consists of a series of vessels and "nodes," which filter out bacteria and other microorganisms.