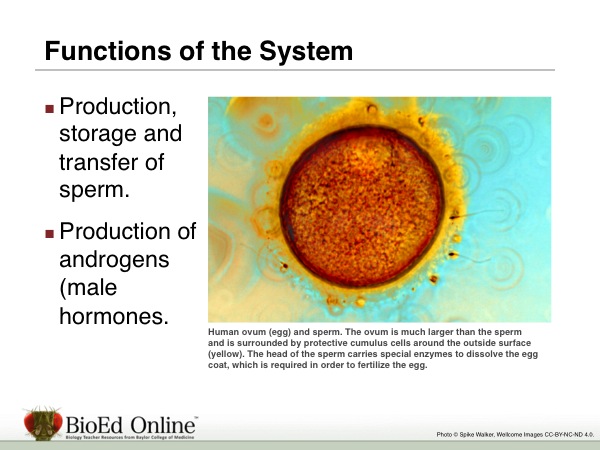 Functions of the System

The seminiferous tubules are the site of sperm production and development within the testes. Once sperm have reached maturity, they are transferred to, and stored in the epididymis.

Sperm are relatively simple cells consisting of a head, body and tail. The head encloses a compact nucleus and is capped by a vesicle, called a acrosome, which contains enzymes that aid in the penetration of the protective layers surrounding the egg. The body and tail propel the sperm. Within the tail is a flagellum, while inside the body are a centriole—which acts as a basal body for the flagellum—and mitochondria which generate the energy needed for the flagellar movement that transports the sperm during sexual intercourse.

An interplay of various hormones triggers and controls sperm production, and a male can produce as many as 12 trillion sperm during a lifetime. The principal male sex hormones are androgens, of which testosterone is the most important. Androgens are directly responsible for the primary and secondary sex characteristics of males. They also are potent determinants of behavior in mammals, and are responsible for increases in general aggressiveness. Hormones from the anterior pituitary and hypothalamus control both androgen secretion and sperm production by the testes.