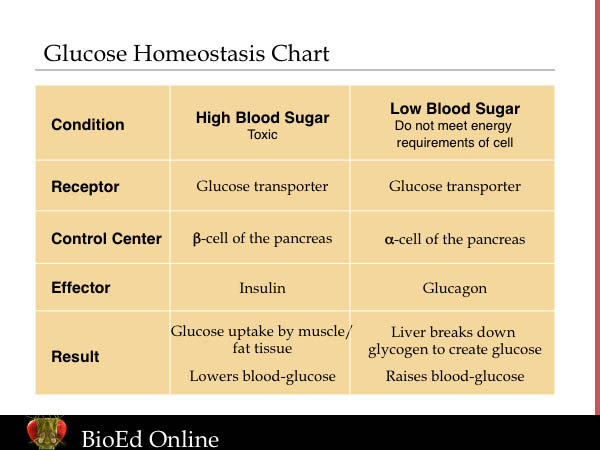 Glucose is used by many organisms as fuel, but it is vital that glucose levels be tightly regulated. Too little glucose will lead to starvation, while too much is toxic. Glucose homeostasis is accomplished through highly complex mechanisms involving many different molecules, cell types, and organs.

Briefly, when glucose enters the bloodstream (after the digestion of food), it is detected by specialized cells in the pancreas, called β-cells. These cells respond to the rising blood-glucose concentration by releasing the enzyme, insulin. Insulin then signals to other tissues in the body (i.e., muscle cells and adipose tissue) to take in glucose to be used as energy (in muscle cells) or stored for later use (in adipose tissue). The result is a lowering of blood-glucose concentration to non-toxic levels.

In times of low glucose intake (between meals or in cases of starvation) the α-cells of the pancreas release the enzyme, glucagon. This enzyme directs the liver to break down stored glycogen into glucose and release this glucose into the bloodstream, thereby raising blood-glucose concentration to a desired level. The glucose transporters expressed on the β- and α-cells that bind glucose are the receptors of this homeostatic system. The β- and α-cells, themselves, are the control centers. They process information from the receptors and respond to it in a way that will maintain a constant internal environment. Insulin and glucagon are the effectors. This system is complex; the β- and α-cells working continuously to achieve the optimal, homeostatic blood-glucose concentration.