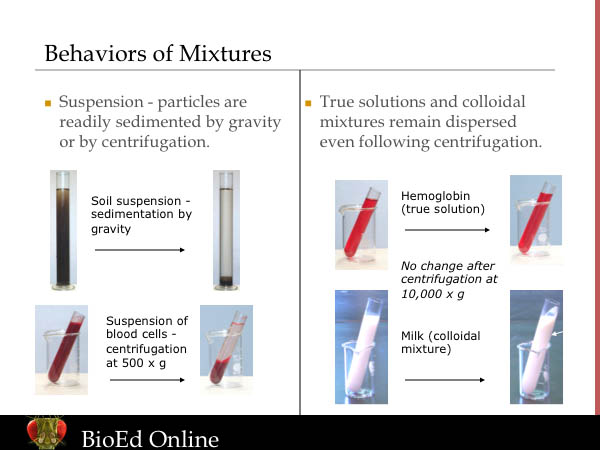 Smaller particles separate more slowly. For example, whole blood treated with anticoagulant may take hours to separate completely, with hemoglobin-rich red blood cells on the bottom, the lighter white cells in a layer above the red cells, and plasma on top. Centrifugation speeds up the process.

The properties of a mixture must be observed in order to confirm that it is colloidal. Even prolonged centrifugation cannot separate the minor components from the major component of a colloidal mixture. For very small particles the resistance to movement effectively opposes the force causing such movement. Neither gravity nor centrifugal force can separate components if they are of equal densities. The nature of colloidal systems prevents their separation even by extremely high centrifugal forces.

True solutions, like colloidal systems, remain dispersed even with conventional centrifugation, but different principles are involved. Molecular interactions between minor components and the major component of a true solution make it energetically unfavorable for separation to occur. However, separation can be accomplished by prolonged centrifugation in an ultracentrifuge. One of the earliest methods for determination of the molecular weights of proteins involved ultracentrifugation of protein solutions.