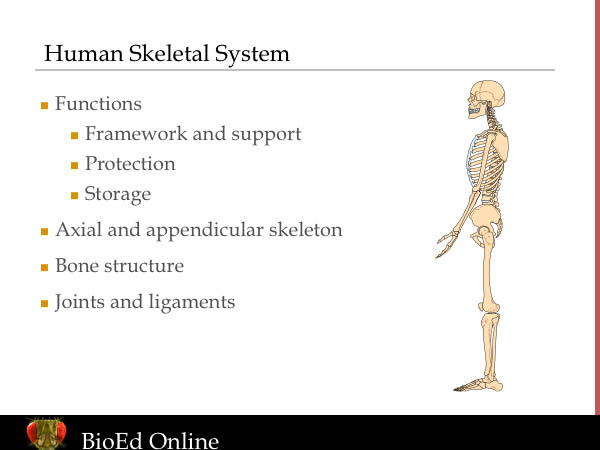 The skeleton forms a sturdy internal framework of 206 bones and associated tissues - cartilage, tendons, and ligaments. Bones provide the base to which muscles attach and also the leverage required to accomplish external movement. The skeleton protects vital organs such as the brain, spinal cord, heart and lungs. As a living, dynamic tissue, bone stores vitamins and minerals (especially calcium and phosphorus) and houses red bone marrow, which produces blood cells.

Approximately four times as strong as concrete, bone is one of the strongest materials produced by nature. It is a connective tissue composed of cells called osteocytes, which are embedded in a hard, calcified matrix. Bones are made of a dense outer layer of compact material that surrounds a core of loosely structured spongy bone. The compact layer of bone is covered by a fibrous membrane called the periosteum. Cavities within each bone contain red bone marrow (blood-forming tissue) or yellow bone marrow (fat storage).

Movement of the skeleton occurs at the joints where two or more bones meet. There are three categories of joints. Slightly movable joints allow some movement but function mainly as a cushion (eg, joints between the vertebra). Freely movable, or synovial, joints allow a range of movement determined by the structure of the joint.  Examples of movable joints are the ball and socket (shoulder), hinge (elbow), pivot (between radius, ulna and humerus), and saddle joint (thumb). A few joints found in the skull are non-movable (sutures). Ligaments are inelastic connective tissues which hold bones together in a joint.