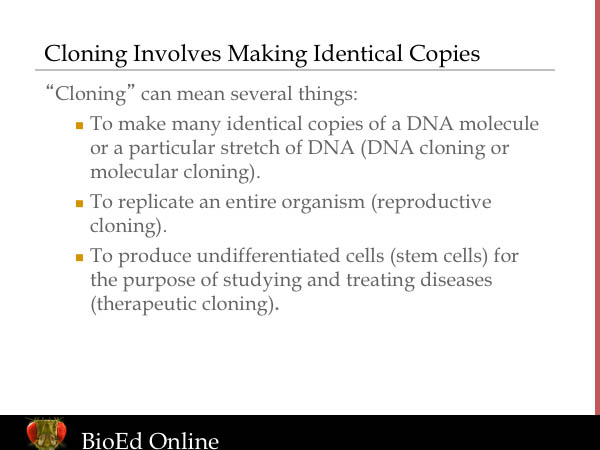 In the simplest terms, cloning is the creation of a genetically identical copy of an original organism. Plants are relatively easy to clone. Most people are familiar with the use of cuttings or stem segments (such as the "eyes" of potatoes) to create new plants. Technically, the new plants are clones of the original, because they are genetically identical to the parent plant. In the wild, many different kinds of plants and animals use forms of reproduction that copy an exact genotype. This type of reproduction (which is seen in grasses, strawberry plants, sponges and flatworms, for example) often is referred to as asexual reproduction. Even fraternal twins can be thought of as clones, because they have identical sets of DNA.

Molecular biologists use the term "cloning" to refer to a variety of processes that involve making identical copies of part or all of a DNA molecule, a single cell type, or an entire organism. DNA cloning technology, also referred to as molecular cloning, recombinant DNA, or gene cloning, is a common practice in molecular laboratories today. A DNA fragment from one organism is introduced into a self-replicating element (host) such as a bacterial plasmid. Molecular biologists use DNA cloning to create many identical copies of a DNA molecule or to isolate a particular stretch DNA (which involves making identical copies of the DNA of interest).

SCNT also is used in therapeutic cloning to produce many copies of stem cells. Stem cells are undifferentiated cells that can be used as replacement cells to treat a variety of diseases and disorders. The purpose of this type of cloning is not to produce another organism, but to generate copies of cells in sufficient quantities for research and medical treatments.