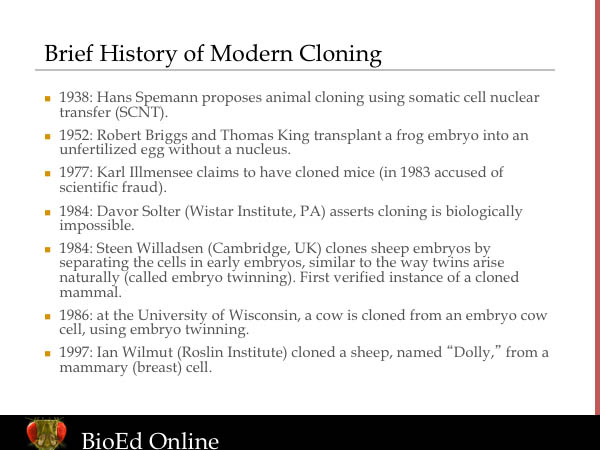 The concept of vertebrate animal cloning was introduced seriously in 1938. Early stages of cloning research incorporated a process called "twinning." Twinning takes a fertilized egg (after a sperm has naturally fertilized the egg) and waits until it divides into two identical cells. These cells then are separated and each is implanted in a mother. The resulting offspring are genetic twins or identical clones.

Early attempts at animal cloning always used embryonic cells. Remember, as an organism develops, cells differentiate and specialize (nerve, kidney, etc.). Once cells specialize, some of their DNA  "turns off" and becomes inaccessible. Using an embryonic cell for cloning bypasses this hurdle, since all of the DNA still is accessible.

In the 1980s, researchers selected embryos at early stages of development and used individual cells to create clones. For example, scientists might have taken a four-cell embryo, broken it up and isolated each of the four cells. Each of these cells then could produce a whole organism on its own, and each new organism would be identical to (or a clone of) the others. However, it was not until 1997 that researchers were able to take a somatic cell from an adult organism and use it to produce a cloned embryo that developed into an adult organism, genetically identical to the donor organism.