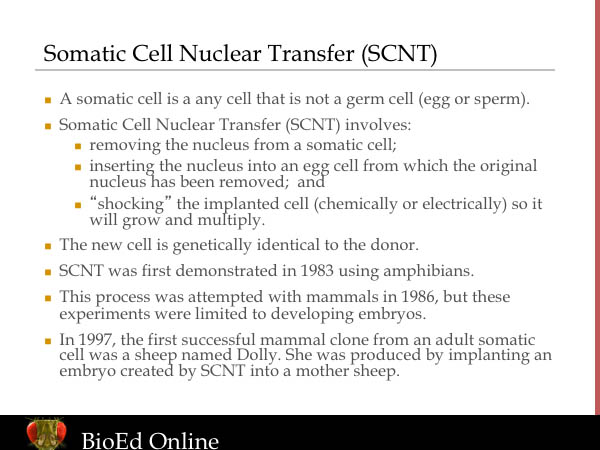 To understand how somatic cell nuclear transfer (SCNT) works, we must first understand a few things about cells. SCNT uses two principle types of cells-a somatic cell and an egg cell. A somatic cell is an adult cell or any nucleated cell in the body that is not an egg or sperm cell (gamete or germ cell). Egg cells are female reproductive cells (gametes) that can be fertilized by a sperm cell (also called gametes) to create an embryo.

Remember that the cell's nucleus has DNA, which contains the blueprint of the entire organism. Using SCNT technology, researchers remove the nucleus from a somatic cell and from an egg cell. The nucleus from the somatic cell is injected into the enucleated egg cell, thus replacing the nucleus of the egg cell with a nucleus from the somatic cell. Using electric current or chemicals to stimulate cell division, the cell is reactivated. The egg cell begins dividing, producing two, four, eight... cells. Even though the entire cell nucleus has been replaced, some of the clone's genetic material is contributed from mitochondrial DNA found in the cytoplasm of the donor egg cell. Therefore, the resulting organism will not be an exact copy if the donor of the egg cell and the somatic cell are from different donors.

SCNT was first described in 1983 in amphibians and was later demonstrated in work with sheep and mouse embryos in 1986. Accumulation of technology and data led to the first successful mammal clone, using SCNT, in 1997, when Scottish scientists at Roslin Institute created a sheep named Dolly.