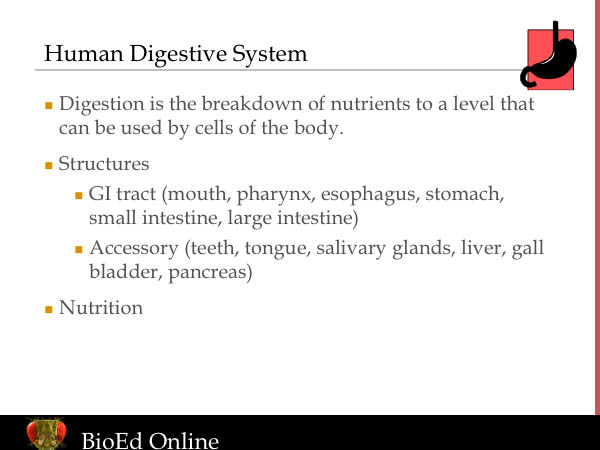 The 19th century German philosopher, Ludwig Feuerbach, said, "A man is what he eats." Food fuels the body's cells and is used as building material for repair and in some cases, is stored for future use. The purpose of digestion is to break food down to molecules that can be used by cells. Digestion involves three principle processes: mechanical digestion, chemical digestion and absorption.

The process begins in the mouth. Chewing initiates the mechanical breakdown of food and is followed by secretion of saliva, which moistens and lubricates food for swallowing. Saliva also contains amylases (enzymes), which start the chemical breakdown of carbohydrates.

The swallowing reflex begins in the pharynx and initiates rhythmic waves of smooth muscle contractions called peristalsis. Peristaltic contractions transport food to the stomach and allow a person to swallow even if he/she are upside down.

A nutrient is a substance the body needs for growth, repair and maintenance. Nutrients include carbohydrates, proteins, lipids, vitamins, minerals and water.  Carbohydrates must be broken down into monosaccharides and are the body's main source of energy. Proteins are broken down to amino acids and supply the raw materials for growth and repair. The body requires 20 amino acids, 10 of which it cannot make and must obtain from outside sources. Lipids are reduced to fatty acids and glycerin. They are used to make steroid hormones, cell membranes and also store energy. Vitamins are organic molecules that aid in the regulation of body processes. Finally, water is required for metabolism and chemical reactions within the body, for transport of substances around the body, and for regulation of body temperature. Approximately two-thirds of the body weight is water.

The stomach contains an extra layer of muscle that aids in mechanically mixing and churning food into a semi liquid form called "chyme." Chemical digestion begins with proteins through the action of hydrochloric acid and the enzyme, pepsin. Only water and a few substances, such as aspirin and alcohol, are absorbed by the lining of the stomach.

As food enters the small intestine (so named because of diameter, not the length), secretions from the liver, gall bladder and pancreas are added. The small intestine completes digestion of food materials and the nutrients are absorbed into the blood. Fingerlike projections called villi (covered with microvilli) line the interior of the small intestine. Villi increase the surface area for absorption and secretion.

The large intestine is much shorter than the small intestine but is greater in diameter. The large intestine does not contain villi, which greatly reduces its available surface area for absorption. It has no role in digestion. Only water and vitamin K, synthesized by bacteria living in the the colon are absorbed into the bloodstream from the large intestine. Undigested or unabsorbed food is eliminated.