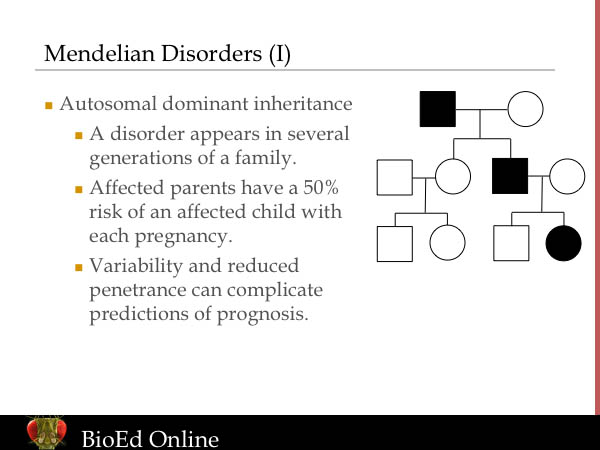 In general, males and females affected by autosomal dominant disorders will be affected with equal frequency and severity, but there may be exceptions in cases where a particular disorder affects the genders differently. Male to male transmission of the disorder can occur in families with affected males. The children of affected heterozygous individuals typically have a 50% chance of inheriting the disease associated gene and being affected, unless the disorder demonstrates reduced penetrance. Reduced penetrance is a phenomenon in which some gene carriers remain unaffected despite the fact that they carry a gene associated with a disorder. One explanation for this phenomenon is that the gene is necessary but not sufficient to cause the disease. In these cases, the child has a 50% risk of inheriting the gene from an affected parent but may not show the disorder. Some autosomal dominant disorders show reduced penetrance. Others do not. The degree of reduced penetrance associated with a particular disorder depends upon the disorder in question.

Persons not affected by autosomal dominant disorders generally do not have affected children. However, there are exceptions, such as when a new mutation in a gene occurs at some point during transmission of the gene from parent to child. The child could be affected by the disorder while the parent remains unaffected. The percentage of cases of a particular disease that arise from new mutations varies from disorder to disorder.

Autosomal dominant disorders also frequently show a high degree of variability. Variability means that individuals who are affected by the disorder can display a variety of symptoms and a range of severity of the symptoms. A heterozygous affected parent has a 50% chance of passing the gene associated with the disease to each of his or her children, but if the disorder is highly variable it may be difficult to predict the severity to which a child will be affected. In most cases, variability is thought to represent the influence of other genetic and/or environmental factors on the expression of the disorder.

Examples of autosomal dominant disorders include: Marfan syndrome, neurofibromatosis, and Waardenburg syndrome. In pedigree drawings, boxes are males, circles are females. Shaded shapes are affected individuals, open shapes are unaffected individuals. The drawing on this slide illustrates an autosomal dominant disorder. In this family, the disease is passed from a man to his son, and then from the son to his daughter.