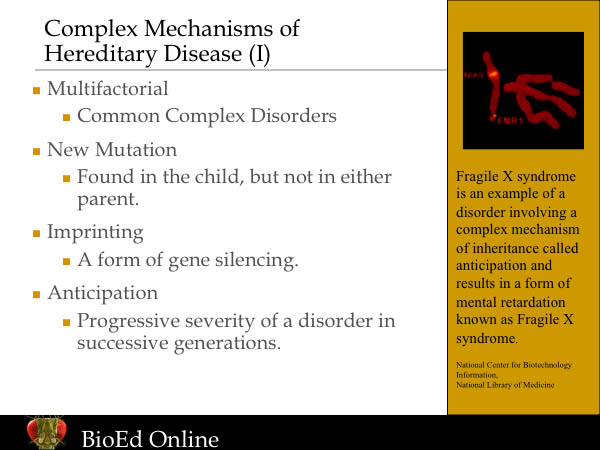 Complex Mechanisms of Hereditary Disease (I)

Multifactorial disorders, which include common complex disorders, are characterized by the interaction of multiple genetic and/or environmental factors that influence the expression of a disorder. Although common complex disorders may not show a clear pattern of inheritance like Mendelian disorders do, there is typically a familial aggregation of the disorder. That is, close relatives of an affected individual may be at increased risk for the disorder, compared to the general population. Examples of multifactorial diseases include some forms of diabetes, high blood pressure, and obesity.

Disorders associated with a new mutation occur when a mutation happens prior to or during gametogenesis, or after fertilization. The mutation is found in the child but not in either parent. Timing of occurrence of the mutation is important to the tissue distribution of the mutated gene, the symptomatic expression of the disease, the risk for additional affected offspring of the parents, and the risk for future offspring of the affected individual. For example, if a mutation occurs in the gonadal tissues of an individual with a new mutation, there is an increased risk to future offspring of that person. An advanced paternal age effect is characteristic of some new mutation genetic diseases. Examples of diseases with a high new mutation rate include achondroplasia, Marfan syndrome, Waardenburg syndrome, and neurofibromatosis. These all are dominant disorders. Although recessive new mutations surely occur, it is far more likely that both parents of an individual affected by a recessive disorder are carriers of the recessive mutations.

Imprinting is a form of gene silencing whereby certain genes are methylated during gametogenesis (formation of egg and sperm) to impart parent of origin effects on gene expression. For example, if a gene is maternally imprinted (that is, silenced in the maternal copy during female gametogenesis), only the paternal copy of the gene is expressed in the child. Paternal imprinting of genes also occurs. During gametogenesis, parental imprints are erased and reset, in a manner consistent with whether the gametogenesis is occurring in a male or a female.

Another source of abnormalities in imprinted genes involves the imprinting centers (DNA sequences) that control the establishment of an imprint and the switching of imprints in gametogenesis. Mutations in imprinting centers can result in disease because of failure to erase the grandparental imprint during gametogenesis. Examples of disorders associated with imprinted genes include Angelman syndrome and Prader-Willi syndrome. These disorders can also be caused when errors in meiosis result in a child who inherits both copies of his or her chromosome 15 from a single parent, resulting in inheritance of only imprinted copies of the gene. This phenomenon is called uniparental disomy, or UPD.

The appearance of a genetic disease at progressively earlier ages of onset and with increasing severity in successive generations of a family is called anticipation. The molecular genetic phenomenon behind anticipation is a length expansion of repetitive DNA sequences within a gene such as triplet (three nucleotide) repeats during transmission of the gene from generation to generation. These expansions cause increased severity of the disease with growing repeat length. Examples of diseases that show anticipation include myotonic dystrophy, Fragile X syndrome and Huntington disease.