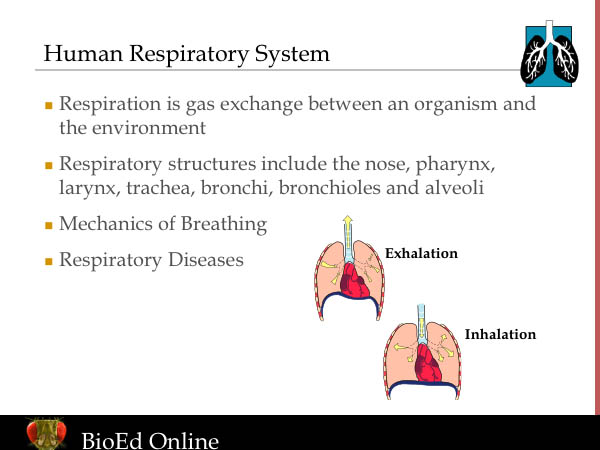 Oxygen is a vital element for metabolism. The exchange of oxygen and carbon dioxide between body cells, blood and the air in the lungs is called respiration. (Cellular respiration is a process whereby energy is released from the breakdown of molecules in food at the cellular level.) Oxygen is transported to the cells of the body primarily by binding to hemoglobin which is found within red blood cells. Carbon dioxide is transported by diffusion into the plasma, binding to hemoglobin and forming a bicarbonate compound in the blood. Carbon dioxide levels in the body are detected in the brain and affect breathing rate more than do oxygen levels in the body.

The human respiratory system consists of the nose, pharynx, larynx, trachea, bronchi, and lungs (composed of bronchioles and alveoli). The lungs are housed in an airtight pleural cavity framed by the rib cage and diaphragm.

Breathing (the movement of air in and out of the lungs) is produced by pressure differences created by changing the size of the pleural cavity. The diaphragm contracts and the rib cage is raised. The volume of the pleural cavity is increased, creating a partial vacuum between the lung cavity and the atmosphere, and air enters the lung. The average breathing rate in humans is approximately 14 breaths per minute.

Common respiratory disorders include bronchitis, pneumonia, emphysema, asthma and lung cancer. Diseases such as Legionnaire's and tuberculosis are caused by bacteria but many disorders result from damage inflicted by smoking and breathing contaminated air.