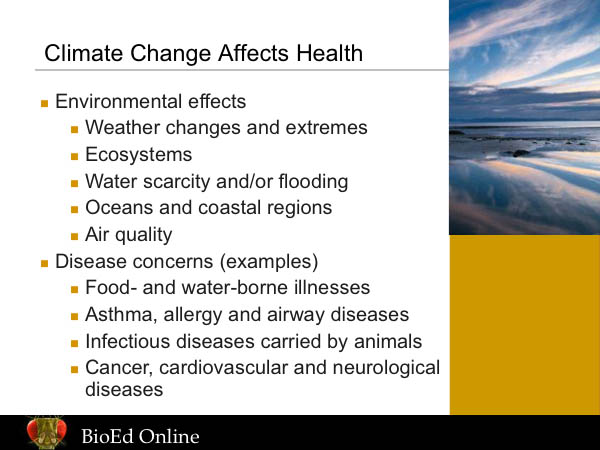 Climate change directly affects many aspects of the environment including water resources (drought or flooding) air quality, weather changes, oceans and coastal regions, and  the composition and functioning of ecosystems. Changes in rainfall, other precipitation and temperatures, and the melting of summer ice caps are, and will continue to alter the availability and quality of water across much of the planet over the next 30 years. In the United States, water security—the reliable availability of water for drinking, agriculture, manufacturing, and myriad other uses—is becoming a pressing issue.

The complex atmospheric chemistry that governs air quality is modulated by heat, humidity, degree of ultraviolet (UV) radiation, and many other factors. Changes in any of these elements can directly reduce air quality, particularly in urban areas, by increasing concentrations of, and human exposure to a variety of toxic air pollutants, including chemicals, fungi and aeroallergens. In many parts of the US, climate change and the resulting weather events, such as drought and wildfires, will reduce general air quality, elevate human exposure to a variety of pollutants, and give rise to an increased incidence of asthma, cardiovascular disease, and many respiratory ailments.

Some human health effects associated with climate change will result from extreme weather events, which are expected to become more common in a warmer climate. For instance, more intense hurricanes and increases in flooding and wildfires may exacerbate a wide range of health effects resulting from the release of toxic chemicals from landfills, the contamination of drinking water with raw sewage due to an aging and damaged water infrastructure, higher concentrations of air pollutants that are especially harmful to susceptible populations (particularly children and the elderly), and many other hazards.

Climate changes, including hotter temperatures in certain arid and semi-arid parts of the United States, can dramatically alter existing ecosystems, thereby creating new challenges for agricultural producers and coastal ecosystems that can have serious consequences for food quality and availability. Changes in plant habitat can reduce the availability of grazing lands for livestock.

Climate change also is directly associated with many pest habitats and disease vectors. Fluctuating temperatures can extend or reorient habitats to the point that pests are introduced to new geographic areas. In some cases, life cycles may be altered, thereby requiring increased use of pesticides, and/or use in new areas. Global warming is causing shifts in the ranges of disease vectors that require specific environments to thrive (for example, Lyme disease). Such shifts increase the threat and incidence in humans of waterborne, vectorborne and zoonotic (transferred from animals to humans) diseases.