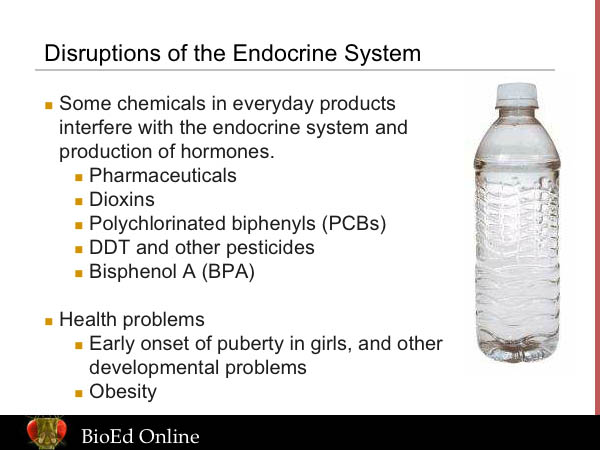 Disruptions of the Endocrine System

The endocrine system produces chemical messengers that regulate many life processes, including sexual development, metabolic functions, development of the brain, growth, and the response to stress. Endocrine disruptors are chemicals that may interfere with the body’s endocrine system and produce adverse developmental, reproductive, neurological, and immune effects in both humans and wildlife.

A wide range of substances, both natural and man-made, are thought to cause endocrine disruption: pharmaceuticals, dioxin and dioxin-like compounds, polychlorinated biphenyls, DDT and other pesticides, and plasticizers, such as bisphenol A. Endocrine disruptors may be found in many everyday products, including plastic bottles, metal food cans, detergents, flame retardants, food, toys, cosmetics, and pesticides. Some endocrine disruptors are so similar to hormones produced by the body that they can occupy the same sites in the body, and produce the same responses as hormones manufactured by the body.