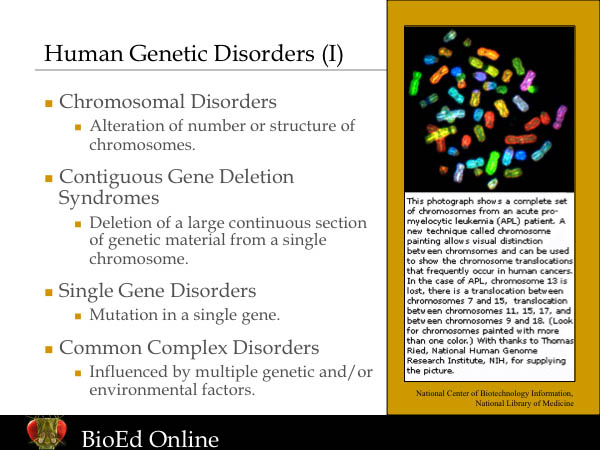 Human genetic disorders can be caused by a variety of mechanisms. Chromosomal disorders are caused by alterations in the number or gross structure of chromosomes. Examples of chromosomal disorders include Down syndrome and Turner syndrome. Contiguous gene deletion syndromes result from large continuous deletions of the genetic material of a chromosome that cause several to many genes to be lost. Examples of contiguous gene deletion syndromes include DiGeorge syndrome (commonly characterized by a history of recurrent infection, heart defects, and characteristic facial features) and Williams syndrome (causes a wide range of medical and developmental symptoms).

The signs and symptoms of genetic disorders caused by chromosomal abnormalities including contiguous gene deletion syndromes are extremely variable. In the case of structural rearrangements of chromosomes and contiguous gene deletion syndromes, most physical effects of the abnormality are likely due to disrupted expression or regulation of genes at or near the sites of the abnormality. In the case of chromosomal aneuploidies (abnormal number of chromosomes), alteration of the normal copy number of genes on the involved chromosome is likely the cause of most of the physical effects.