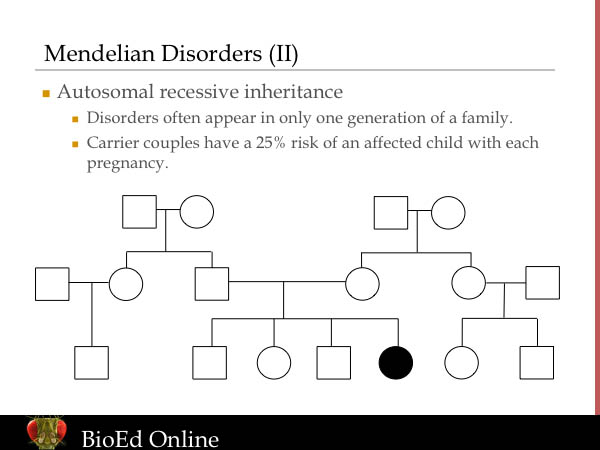 Autosomal recessive inheritance is frequently observed as the appearance of a disorder in only one generation of a family as isolated cases or affected siblings and/or cousins. Autosomal recessive inheritance is sometimes described as horizontal inheritance although this term is not commonly used today. In the case of common recessive disorders or disorders that lead to non-random mating, such as deafness, which is common and frequently leads to deaf by deaf matings, a pseudo-dominant pattern of inheritance may be observed. For genetic counseling and risk assessment, it is important to recognize the possibility that pseudo-dominant inheritance might be occurring in a family.

Under what conditions widespread screening should be undertaken for the identification of unaffected carriers of autosomal recessive disorders is a topic of much debate. At present, most carrier screening programs focus on high risk groups such as screening for cystic fibrosis (CF) carriers among Caucasians and screening for CF, Tay Sachs and other genetic disease carriers among Ashkenazi Jews.