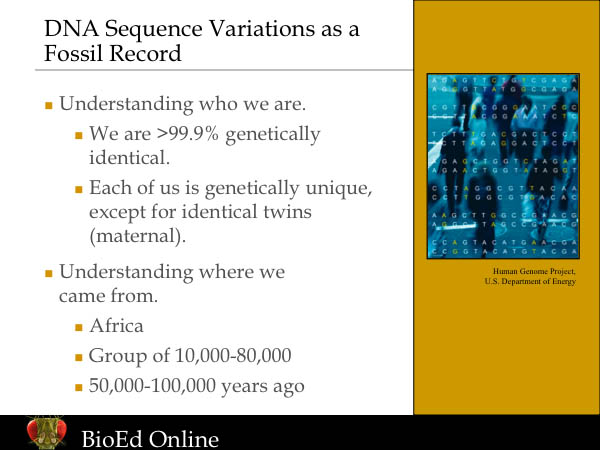 As a species, humans are more than 99.9% identical at the level of our DNA. However, with 3 billion base pairs in our haploid genome, this leaves a lot of room for variation. Thus, each of us is unique, with the exception of identical twins who share the same genetic makeup.

Human genetic polymorphisms have been used recently to trace the history of our species. What has been learned is that humans evolved in Africa about 100,000 years ago. Although the dates are only broad estimations based on calculated mutation rates, we now know that we all are descended from a small group of perhaps 10,000-80,000 individuals. Over time, humans migrated out of Africa in several waves and eventually populated the globe. From these studies, we have learned that every human alive today is related to every other: we are all descended from the same trunk of the human family tree, brothers and sisters separated only by time and geography.